How you've totally ruined the brilliant war I started, by Tony Blair

BACK in 2001, I started a lovely little war, all about feminism and religious freedom and democracy. But Joe Biden’s ruined it and he should be ashamed of himself and I shouldn’t.

My war was so great. It was part of the ‘War on Terror’, remember that? It was this fantastic slogan which made me sound tough and essentially allowed us to invade the same countries we always invaded for their own good.

To be honest, I didn’t think beyond my reputation as a heroic, kick-ass Prime Minister back in 2001, so there was no plan for what would happen two decades later. It was a new millennium, none of that seemed to matter.

Democracy had been restored, women had regained their rights and Bin Laden was dead. I know Obama was the cool and sexy leader by then, but only because I’d led the way.

However, now all that brilliant stuff I did – we won’t mention the tens of thousands of people killed, it’s bad optics – has been undone by Joe Biden’s selfishness. And he’s meant to be the good guy.

So what if he didn’t want to send another generation to an unwinnable war? Now he’s damned the Afghan people to life under the Taliban without a single thought for my legacy.

I hope people remember I began it with the best of intentions, and that now it’s gone wrong it’s not my fault and I wash my hands of it entirely.

That’s the best thing about not being Prime Minister anymore. You can grow your hair long and chat shit with no consequences whatsoever. 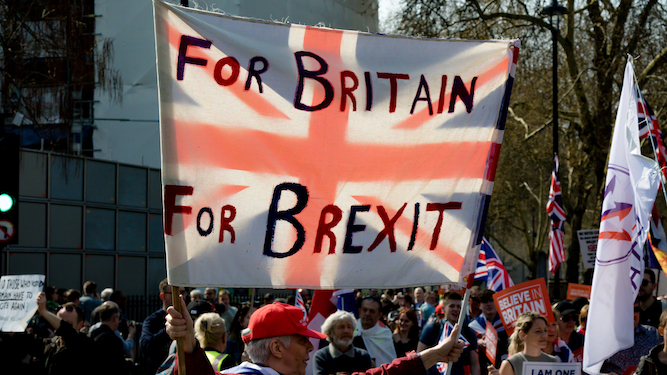 BREXIT now involves so much blind faith, devotion and wilful ignorance of earthly consequences that it qualifies as an actual religion, adherents have confirmed.

As the UK’s infrastructure begins to break down, only making believers more fanatical, the Council for Religious Education agreed that Brexit must be recognised as one of the major religions of the UK.

Leave voter Roy Hobbs said: “There is only one truth and only one path, and that path is Brexit. Only it can bring salvation.

“They considered making it a denomination of Christianity, because we all say we’re Christians when we’re ranting about immigrants, but we don’t want some bloody do-gooder in charge. We’re more one of those fire-and-blood religions.

“Empty supermarket shelves? Closed Nando’s? No milkshakes at McDonald’s? I don’t see ‘em mate. Because the scales have fallen from my eyes. Because I believe.

“The only thing holding this country back from being an paradise of nationalism are the non-believers which must be purged and the Great Satan, or as you call it the EU. Saddle up, everyone. Time for a new crusade.”

Boris Johnson said: “This means I’m the Messiah, which honour I humbly accept. I have to say I always knew.”