I am an inspiration to other people of stupidity. By Liz Truss

I WAS first diagnosed as stupid when I was 16. For a while doctors thought I might be dyslexic or autistic, so to learn I was a person of stupidity was a great relief.

I don’t see my stupidity as an affliction but a positive trait. Stupid people simply see the world in a different way to intelligent people. We have an insight into things that you would regard as made-up, irrelevant, non-existent or wrong.

But to us they are very real and at the core of our worldview.

Everything I say about Northern Ireland is unabashed, incoherent stupidity, from my claim years ago that only a few Irish ‘turnip farmers’ would be affected by Brexit to my clueless meddling that may cause a trade war with the EU we can’t possibly hope to win.

And do not forget my powerful cheese speech: ‘We import two-thirds of our cheese. That. Is. A. Disgrace.’ It’s as true now as it was then. Whatever the f**k it means.

I see myself as an inspiration to other people of stupidity – and not just stupidity, other associated, often undiagnosed, conditions such as malice, self-obsession and monumental inconsiderateness.

You might think that if you are stupid, your life chances are limited. But here I am, inexplicably a cabinet minister, with a chance of making it to Number 10. It’s the feel-good political story of our times.

I hope that stupid schoolchildren see me and say ‘I’m thick as pigshit. There’s no way I should be running a country. But Liz has shown me I can!’ Then take up a career in politics, doing stupid things like claiming you can feed a family of four for 20p.

My message to stupid people across the UK is this: say it loud, we’re stupid and we’re proud. Now go and ask for help tying your shoelaces. 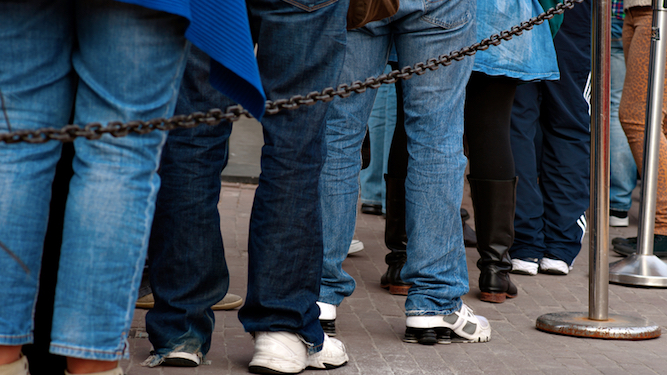 WANT to make the queue you’re standing in move faster? Here are five tactics that won’t make a blind bit of difference but will make sure everyone else knows you’re a dickhead.

Show you’re too important to be waiting like this by making audible huffing and puffing noises and shifting from leg to leg like a dragon who really needs a piss. This will show the riffraff waiting patiently alongside you that you’re superior to them. If their time was as valuable as yours then they’d be huffing and puffing too. The losers.

There’s no better way to let everyone know your feelings about the queue than by calling a friend and telling them, loudly, that you’re pissed off because you’re stuck in a queue. Don’t get distracted and start having a nice chat though, otherwise you’ll forget your main goal, which is to be bloody furious about the queue.

What time did you arrive in the queue? Forget that time and imagine another time ten, 15 or even 45 minutes earlier, and convince yourself you’ve been queuing since then. Buying into your own bullshit will give you a delightful feeling of self-righteous outrage, just like a Daily Mail reader pretending everyone is out to rip them off or ruin their life.

As time passes and you realise your attitude is achieving nothing except dirty looks, you may be tempted to start using this dead time to do productive things, eg. replying to work emails or getting today’s Wordle out of the way. Don’t. Your reason for existing is to be frustrated about the queue. Don’t take your eye off the ball and start making the problem go away.

Time how long each person is spending at the booth, till or check-in and come up with wild exaggerations about how long you’re likely to have to wait until your turn. If the queue suddenly starts moving faster than expected or more booths are opened, don’t lighten up. Shouting out ‘Finally!’ or ‘About bloody time’ is much better.