LIZ Truss is posing for a photoshoot in England kit with a football under one arm as we f**king speak, Britain has realised.

Somewhere in London, the Conservative leadership candidate is putting on full England kit including the exact same sports bra as Chloe Kelly, standing in front of a football pitch and doing that f**king face she does.

Sue Traherne of Chester said: “Of course she is. Doing the full John Terry for a triumph she had entirely f**k all to do with.

“Meanwhile in the background a speechwriter’s frantically rewriting her CV to include a stint as a creative midfielder for her Leeds school’s football team, a career tragically snuffed out by the lack of opportunities afforded to young Northern sportswomen.

“By about noon they’ll release the photos, which will be slapped on the front of every Tory paper desperate to talk her up as prime minister even though she’d be as shit doing that as she would be as England right-back.

“That little piece of cynical bandwagon-jumping should properly harsh everyone’s Euro-winning buzz and by this time tomorrow twats like her will have ruined the whole f**king thing.”

She added: “Who’s minister for sport? Oh Christ, it’s f**king Dorries. She’ll be right next to Liz in rugby kit.” 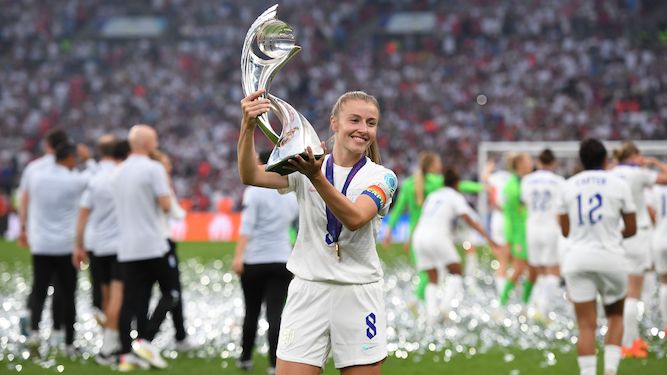 THE Lionesses have left the Euro 22 trophy in one of a possible sixteen nightclub toilets, they have confirmed.

During a whirlwind night of celebrations which saw England’s women get absolutely off their f**king faces, the team has misplaced the trophy they worked so hard for while posing for selfies with equally wrecked fans.

Captain Leah Williamson said: “Ah shit. We’re meant to be showing that bastard off in Trafalgar Square this afternoon and we’re going to look like f**king mugs if we can’t find it. Let’s try and retrace our steps through the raucous haze.

“We definitely had it when we crashed Fabric because I used it to push straight in at the front. And I distinctly remember Mary Earps splashing around with it in the Carwash Nightclub swimming pool, so we can rule those out.

“Beth Mead used it as deposit for a round of pitchers in Cargo because we’d left the FA’s credit card behind a bar somewhere, and Georgia Stanway dragged it along the pavement as we staggered to Electric Brixton. It was in pretty rough shape by Colour Factory.

“That just leaves Ministry of Sound, XOYO, Studio 338, about seven I don’t remember and that illegal drinking den in Bermondsey. Yeah. Does UEFA has a spare, it might be worth asking?”

Nikki Hollis, who found the trophy in the bathrooms at The Pickle Factory, said: “I thought it was a hand dryer.”