Lockdown may stay in place for months because we've f**ked this up, says Johnson

THE prime minister has warned that lockdown measures may remain in place for months because of how badly they have f**ked this up.

Boris Johnson told Britain there is no easy way out of lockdown, largely because he and his team made all the wrong decisions in its early stages, as it progressed and as recently as yesterday.

He said: “Lockdown could continue until the number of new cases falls below 1,000 a day, which it won’t because a rigorous test-and-trace system is something I have not implemented. I’m just not following the science.

“With this resurgence of infections in care homes, a direct result of our policy of sending infected patients to care homes, we expect to see another spike in the community which was entirely avoidable.

“I, of course, was absent when many of the key moves were not made, but my cabinet of Brexit yes-men and incompetent ideologues did an incredible job of f**king this up in my absence.

“Now I’m back in charge and continuing to base our policies on blind optimism and posh idiocy, we’ll continue to bugger this up until we have the longest lockdown and highest death toll in Europe.”

He added: “Then, at the end of the year, no-deal Brexit.” 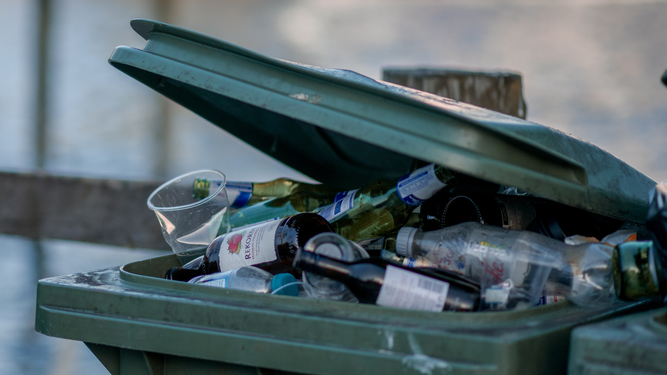 A WOMAN has emptied enough wine bottles to fill a Threshers into her recycling bin.

In what has become a weekly event, Donna Sheridan is noisily filling up her recycling bin with dozens of bottles of Blossom Hill, Jacob’s Creek and Echo Falls.

A bleary-eyed Sheridan said: “Back when things were normal I’d worry the bin men would judge me for going through a couple of bottles of sauvignon blanc a week. But those days of self-restraint are long gone.

“At first I tried to camouflage my love of getting hammered by sneaking some of the evidence into the neighbours’ recycling bin. But now theirs is filled with enough beer cans to be recycled into a Boeing 747.

“So I’m tipping an industrial amount of plonk bottles into the grey bin. The ear-splitting noise is my way of applauding the brave cashiers at the off licence who serve me delicious wine every few days.”

Waste collector Wayne Hayes said: “We lose a lot of good men and women every week as they get infected doing your recycling. But you’ve got to explore New World wines.”