Margaret Thatcher rising from her grave

Tory grandees say that the broken manifesto and tax grab for the NHS is such an outrage against the party’s traditions that the former prime minister is not just turning in her grave but clawing her way out of the grave and striding toward Downing Street to wreak her vengeance.

Iain Duncan Smith said: “I shudder to think what the greatest Conservative leader of our lifetime would think of this. I shudder because I know.

“She will at this moment be imbued with a demonic energy, her eyes glowing crimson, her dead frame revitalised with a power straight from hell that no military force can stop.

“Rising from the earth and shattering her marble tombstone with a single blow, her reanimated corpse will head straight for Westminster where she will decapitate and devour every MP before dropkicking Boris’s severed head over the Thames and eating his hot guts.

“Then, crackling with unholy energy, she will return to Downing Street, resume her position as prime minister, cancel these rises and impose a millennium of eternal night and suffering upon Britain.

“She will use Sajid Javid’s skull as a bowl. It’s the most marvellous news I could ever have hoped for. Hail Thatcher. Hail the Dark Uprising.” 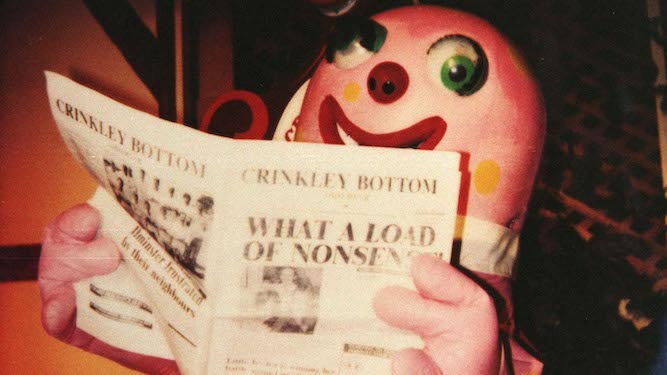 EVER tried to be proud to be British then remembered we made an obese pink-and-yellow monstrosity that only said ‘Blobby’ Christmas number one? And it didn’t stop there:

Invented as a deliberately crap joke on Noel’s House Party, Mr Blobby once towered over the nation’s consciousness like a colossus. He starred on our most popular TV show and was the top attraction at three theme parks. Why? What rational country would do this to themselves?

Tinky Winky, Dipsy, Laa-laa and Po – the four horsemen of the pre-school apocalypse – were imbecilic morons spouting gibberish who proved wildly popular, presaging Brexit. Were narrowly beaten to the Christmas number one by another cartoonish band popular with idiot kids, The Spice Girls.

A huge green ventriloquist’s dummy duck that wore a nappy and spoke in a high-pitched Yorkshire accent about wishing he could fly, created in an Army psy-ops lab and used against the British people at the height of Thatcherism. And yes, we bought his f**king single too.

A woman playing a small, mischievous Scottish boy alongside her husband, who played her father. Every child of the era remembers how deeply disturbed they were when they found that out. It led to questions that no school sex education teacher could answer. Yet despite it all they’re second-rank national treasures.

In contrast to Orville, this bird puppet was entirely focused on violence. All he did was viciously attack people without provocation and Britain absolutely loved him for it. So why wouldn’t far-right wankers from the National Front to Tommy Robinson think this was the way to our hearts?

Since the 1980s Piers Morgan, a parody of an arrogant, conceited, pompous, newspaper editor and TV presenter, has enthralled the nation. Pushing boundaries of tedium and obnoxiousness, he’s delighted us for decades. Because there is something f**king wrong with us.