Petrol shortages, inflation and no deal with America: how to blame it all on Remainers

THE UK is out of fuel and faces a harsh winter and cancelled Christmas – all thanks to bloody Remainers. Here’s how to tell them:

Low on HGV drivers? F**k off. They’ve got the same problem around Europe. What really happened was that the BBC, Remainers to a bloody man, deliberately caused a petrol shortage because they’re desperate to make Brexit look bad. And you fell for it, you dick.

Empty shelves in supermarkets are their fault

What do I eat for dinner? Four meat pies and two tins of beans. What do fancy-arsed Remainers eat for dinner? Panchetta-wrapped sea bass and foccacia, and that’s what the shelves are full of: shit nobody wants. They’re clogging the supply chain. That’s why there’s no Beef & Veg Big Soup in the Spar.

Who causes inflation? People buying things. Who’s got all the money? Liberal elitists in ivory towers out of touch with ordinary British xenophobes. They buy stuff, for example flutes, modern art that you can’t even tell what it is, Sally Rooney novels in hardback – and we pay the price.

No turkey at Christmas is their fault

Turkey, no relation to the country whose entire population would’ve come here if we hadn’t left the EU, is gonna be in short supply this year. And you know why? Yeah. Remainers. Furious that we all had a great Christmas last year even though 15,000 of us died, they’re going all out to ruin this one. They’re pathetic, petty people.

No trade deal with the US is their fault

Joe Biden could barely even look at Boris and that’s not personal, that’s the disrespect shown to his office by guess who? Those twats. Biden’s not risking some blimp of him in a nappy so no trade deal. They’ve literally destroyed our future, which could have been legal weed and guns.

Harry Kane not being able to leave Tottenham is their fault

Finally, the greatest outrage of 2021 is undoubtedly Harry Kane – Leave for sure, you’ve only got to look at him – being trapped at Tottenham. By? You guessed it. Forcing him to adhere to the terms of his contract, just like the EU’s forcing us to abide by a Northern Ireland protocol we don’t like. Remainer fingerprints all over it. 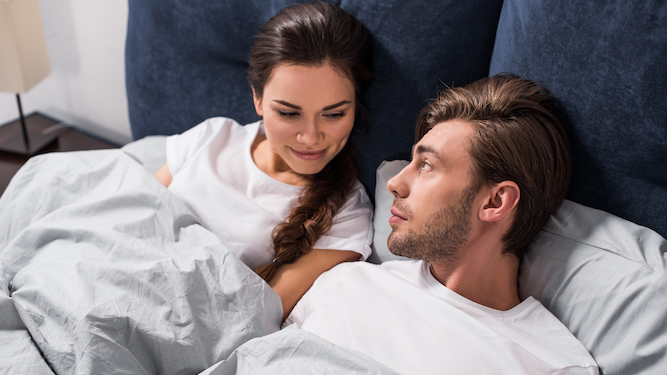 MALE? Every wondered why a seemingly sure thing suddenly evaporated? It’s because you said this:

You’re in one of the few situations where staring at and commenting on breasts is not only acceptable but obligatory, and you’ve still screwed it up. Your offhand comment suggesting her boobs looked better clothed is an absolute passion-killer.

‘You don’t have to do anything’

Works a charm with housework, but pre-coitally is very much ensuring that the next five minutes will be all about you. You might think it’s a magnanimous offer to help conserve her energy. She thinks suggesting your lover lie still while you hump is sickeningly creepy.

‘All my exes said I’m great in bed’

They loved you so they lied to you. That was kind. Unfortunately your rampant ego misunderstood and you now believe yourself a sex legend able to elicit pleasure even from the not-particularly-interested. You’re not. There’s a reason they dumped you.

Nothing makes a woman worry about contraception more. Your suggestion that your mastery of lovemaking is so complete that you only climax on demand turns sex into life-creating Russian roulette. Except it actually solves all contraception worries by stopping everything immediately.

It’s lovely you have so much affection for your mother, but strangely women are usually more likely to enjoy sex with actual men rather than confused milk-seekers with a pitiful Oedipus complex. Still, by the time you’re shouting this you got what you wanted.