A stroll around Leeds with Jacob Rees-Mogg

AKIN to the brave colonials who created the blessing on the Earth that was the British Empire, the Conservatives are sallying forth to open a headquarters in Leeds. Here’s my guide:

The city is home to a wealth of Victorian architecture, such as the Corn Exchange, Town Hall and Thornton’s Arcade, all built on the thriving cotton trade of the 18th century which made Britain the world’s most important mercantile nation and we’re now supposed to be ashamed of. Let me remind you our Parliament outlawed slavery.

The natives of Leeds live stunted but industrious lives, working long hours in mills and factories in terrible conditions, and if they do not currently they soon will again. All men wear cloth caps, which they doff in deference to their betters. One has the right – nay, obligation – to issue a damn good thrashing if they do not.

They do have rugger here, but it is not the gentlemanly amateur game to which one can take one’s corporate clients, but rather a savage, inferior, Northern version that participants are actually paid to play. How vulgar. Also, the ball is I believe a Saracen’s head.

My trusty first edition of Pears’ Cyclopaedia advises that September to November brings thick fog, December to February heavy snow, and March to June torrential rain. The summer weather is unknown since all gentlemen are in Europe taking the Grand Tour.

Not even the suppers endured at Eton would prepare one for the ghastly regional food. Additionally, there is the constant threat of typhoid, cholera and lead poisoning, so avoid eating locally. A good manservant should have already telegraphed Fortnum’s to arrange for weekly hampers to be sent via the Great Northern Railway. 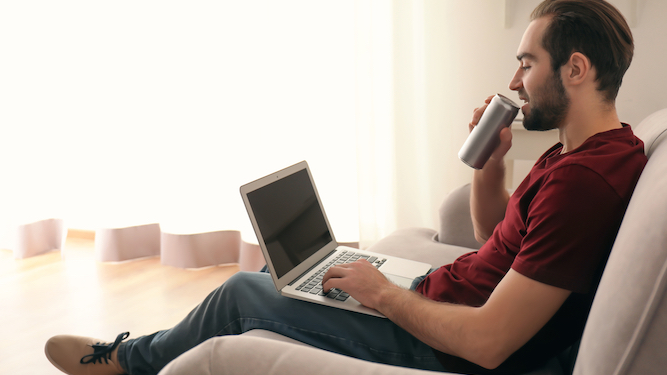 A HOMEWORKING man has cracked open his customary elevenses of a can of lager.

Network engineer Joe Turner fell into the habit back in April but believes that since it does not affect his work there cannot possibly be any harm in it.

He continued: “Back when I was in the office I used to have a Red Bull at this time of the morning, but the caffine makes me jittery and they’re full of sugar.

“So, one hot day in April, I went to the fridge and all I had was lager and I realised nobody was watching and I could have one if I liked. So I did. And you know what, it really breaks up the morning.

“I don’t overdo it. After my elevenses I stay dry until my lunchtime cans, then maybe I’ll have a cheeky one mid-afternoon before I clock off with four or so at 5pm.