THERESA May has offered Boris Johnson her job as prime minister while all the other Tories hid and laughed as he absolutely crapped himself.

More than 300 Conservative MPs were concealed behind chairs and pot plants in the Commons Smoking Room as May made the offer to Johnson, who immediately went white and had to steady himself against a table.

Member for Wyre Forest Mark Garnier said: “I almost joined him in soiling myself because that is the funniest shit I’ve ever seen.

“May was totally deadpan and just admitted that he’s right on Brexit, that he would do a much better job than her, that he was prime minister as of now and Michel Barnier was next door waiting for him.

“Then she gave him a timetable of meetings with the parliamentary party, the 1922 Committee and Tory members and advised him they were out for blood. That was the quack moment.

“He started trembling, said he’d love to but he didn’t want to be distracted from his Telegraph column, then ran out saying he needed to buy some printer paper. Absolutely hilarious.”

Johnson said: “I regret that I cannot immediately assume the proffered position, as I have urgent commitments in this lavatory until after Brexit.”

Man swimming with dolphins thought they would do more 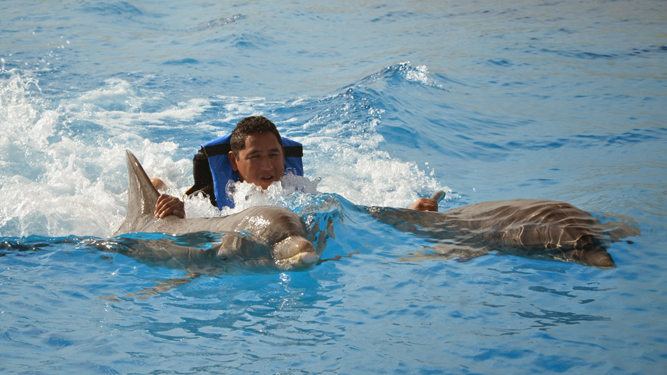 A MAN swimming with dolphins thought they would do more, he has confirmed.

Tom Booker travelled to Florida to achieve his dream of spending time in the water with wild dolphins, only to be disappointed when they behaved exactly as expected.

“All they’re doing is moving around in the water, and not even that fast. I’ve tried asking them to do some tricks, but they’re ignoring me.

“You’d have thought they’d have put some flaming hoops up or something. I’ve come all the way from Bracknell.

“I should have thought about how boring swimming is before I came.”

He added: “I thought dolphins would have these unique human-like personalities but the only real difference is that some of them are bigger than others.”

Dolphin Helen Archer said: “We’re not exactly thrilled about it either. He’s pissed in the water three times.”