A LEAVE supporter cannot remember if he is actually against Britain’s EU membership or if he just says he is to wind up Remainers.

Electrical contractor Stephen Malley thinks he voted Brexit, although his first clear memory around the referendum is claiming he did to irritate some arsehole Remain voters in a pub.

He said: “Certainly I don’t give a toss about the EU, and never did. But I’m addicted to the outraged reactions I get when I say I voted Brexit.

“Thing is, I don’t want everyone losing their jobs. The weak pound’s done me no favours. Signing trade deals with Cambodia or wherever’s fuck all to me.

“But ‘taking back control’ sounds tough like the tagline to a Jason Statham film and ‘you lost, get over it’ is something I rarely get to say as a Coventry City fan.

“Maybe I just like antagonising people because, let’s face it, there’s an attention-seeking twat inside all of us. Anyway too late to change now.”

Malley has admitted that perhaps not every Remain voter is a rich, sneering Londoner who goes skiing with their au pair, adding: “But most of them are.” 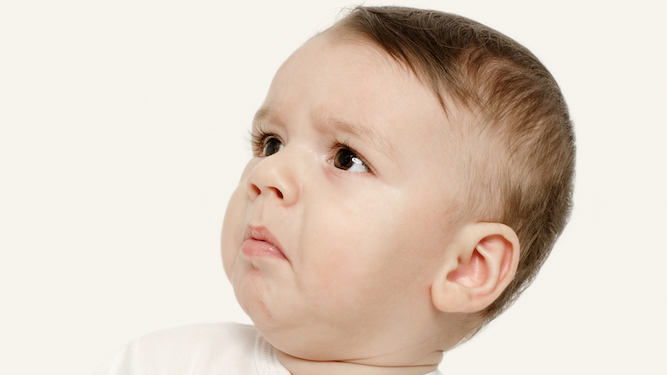 A BABY wearing a Nirvana babygro actually much prefers their contemporaries Pearl Jam, he has admitted.

Nine-month-old Tom Booker, who was bought the logo-bearing all-in-one by his father, explained that his strong feelings on the roots of grunge were not reflected by his clothing.

He said: “Face it. Nirvana had one good album.

“Pearl Jam, who came out of Seattle at the same time and were much more popular before MTV boosted pretty-boy Cobain to stardom, eclipsed them decades ago and are still a compelling live proposition today.

“But just because of his suicide, idiots like my dad still worship Nirvana as if they were edgy and rock ’n’ roll. It’s pathetic.

“As soon as I get any motor control I’ll be tearing this thing off and changing the Spotify password to stop the bloody endless Nevermind. And don’t get me started on Foo Fighters.”

Booker added: “Still, it is some comfort to me that Cobain would be spinning in his grave if he could see this gross commercialisation of everything he stood for. Also I like crapping in it.”