Britons to be given universal right to Greggs

BRITISH citizens’ right to never be more than 1,000 metres from a branch of Greggs will be enshrined in law, the government confirmed yesterday.

The measure was announced in the Queen’s Speech alongside the long overdue £150 million Cornwall spaceport, greeted with cheers by Padstow’s sizeable astronaut community.

The Queen said: “My government’s British Bill of Rights, which will replace unnecessary European rights, focuses on the rights that really matter to the people of this country.

“Chief among these is the right to enjoy a steak bake whenever the urge for one is felt, regardless of location.

“There are residents of the UK who still must traverse great distances for a Mexican chicken baguette, locked out of our national identity by circumstance.

“From 2018 if you, or your neighbours, are further than one kilometre from a Greggs then you may apply for a Greggs to be constructed or compensation of £32 per person per day, or £21.39 for under 25s.

“Greggs is the birthright of every British citizen. My government will make that a reality.”

Norman Steele of Lampeter in Wales said: “Our nearest Greggs is 20 miles away.

“We have to chew on cardboard soaked in motor oil just to feel like everyone else, and that’s wrong.” 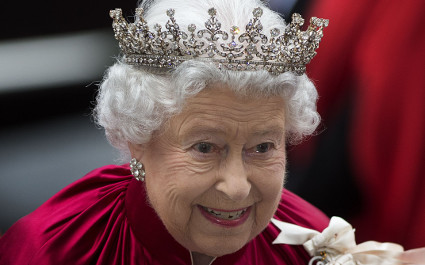 THE Queen’s Speech is littered with song titles from thrash metal act Slayer, it has emerged.

Following a bet with Prince Harry, the Queen has seamlessly incorporated the names of 23 different songs from the band, unnoticed by the assembled MPs.

Denys Finch Hatton, Conservative MP for Hampshire North East, said: “I must say, she picked the perfect band for it.

“When she opened with ‘Here Comes The Pain,’ from the God Hates Us All LP, nobody blinked an eyelid, and when she followed up with ‘Evil Has No Boundaries’ everyone just thought how refreshingly honest we can be now we’ve got a majority.

“Our prison policy was described as an ‘Altar of Sacrifice’ and ‘Expendable Youth’, which again raised no eyebrows, and referring to the years of Labour rule as ‘Seasons in the Abyss’ is basic common sense.

“I only spotted the references because I spent four years as tour drummer for Lawnmower Deth. She’d never have got away with Mariah Carey songs.”