Brown Dangerously Close To Realising What's Wrong With Him

GORDON Brown has taken another small step towards finally realising what's wrong with him, it emerged last night.

As the prime minster began to accept a limited degree of responsibility for the financial crisis, experts said he could now be just days away from a catastrophic episode of horrifying self-awareness.

Political psychiatrist, Dr Martin Bishop, said: "It is crucially important that his family and friends are there to support him because he may now be lining up his brain for a final approach into reality airport.

"When he finally hits the tarmac they are going to have to speed towards him in the fire engines of consolation, before drenching him with the thick, white foam of love and understanding."

Dr Bishop warned that Mr Brown could now be on the verge of accepting responsibility for selling Britain's gold reserves at the bottom of the market, destroying the private pension system while protecting the pensions of the people who vote for him, under-equipping British soldiers in Afghanistan and Iraq, using taxpayers money to save the Labour Party from bankruptcy and generally spending his entire career being a lying, manipulating, self-absorbed thug who has tried to smear and destroy every one of his opponents.

He added: "If each of these realities hit him in rapid succession, his psyche could then begin to collapse in on itself.

"That's why those closest to him must be on hand to try and prevent what will basically be the psychological equivalent of the Gestapo torturer whose face gets melted at the end of Raiders of the Lost Ark.

"Actually, on second thoughts, don't – I really want to see that." 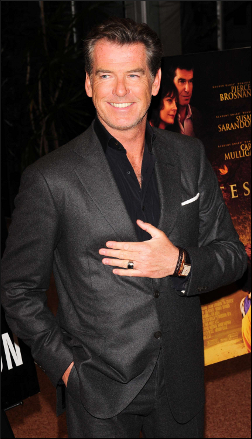 PRIESTS who are gay are 100% more likely to have sex with men rather than boys, experts have claimed.

As the Vatican's most senior official after the Pope said child sex abuse was caused by homosexuality, the Institute for Studies stressed that the defining characteristic of gay men was their particular fondness for other men.

Institute director, Professor Henry Brubaker, explained that priests who are gay are likely to do one of three things:

a) Stay at home with a life-size cardboard cut-out of Pierce Brosnan and a scented candle; b) Stay at home with a copy of the Bible and a heavy chain with which to punish themselves; or c) Take off their dog collars, put on a nice, tight polo shirt and head out to a club in the hope of meeting a fellow gay man for white wine spritzers and long, sweaty hugs.

He added: "What they're not going to do is feel-up choirboys or ask them to come to rehearsal wearing nothing but trunks. That's called 'being a paedophile'.

"For a gay man, priest or otherwise, the great thing about liking men is that there are millions of them, so there would be no possible need to descend upon a group of eight year-old choristers.

"And of course if you're a gay priest it's much easier to just be gay – even in secret – because unlike paedophilia, it's not a horrible, horrible crime."

Church historian, Julian Cook, added: "Unfortunately the Vatican has been defeated by it's own logic. If the priests really were gay they would have been defrocked immediately which means the Vatican knew they weren't gay and instead decided to protect them because in their heads being a homosexual is somehow worse than being a paedophile.