LORD Ashdown has accused the Labour Party of playing politics with his feet after he was offered a vigorous massage by Gordon Brown.

The former Liberal Democrat leader said he met the Prime Minister-elect last week to talk about areas of mutual interest, but that Brown wasted no time in offering him a seat in his cabinet.

Ashdown said: "I told him that his offer of the job of Northern Ireland Secretary was inappropriate. He then asked if there was anything he could do to persuade me.

"I joked that my feet were sore and he was most welcome to give them a rub. To my surprise he made it clear that if I wanted a foot rub then Douglas Alexander would be happy to oblige.

"I then noticed Douglas Alexander standing by the door holding a bottle of E45 and offering me what I can only assume was a reassuring smile."

He added: "The Chancellor told me that he was serious about creating a new type of politics in Britain and said that senior figures from different parties should not be afraid to touch each other."

Ashdown said he thanked Brown but was unable to accept a foot rub or any other kind of therapeutic physical contact without the permission of Lib Dem leader Sir Menzies Campbell. He then left the meeting.

Alan Johnston, front-runner for the Labour deputy leadership said: "I agree that we should be able to touch people in other parties but I think there are plenty of talented Labour MPs who deserve to be touched first." 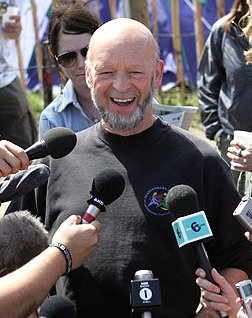 CENSORS have welcomed a new version of the controversial game Manhunt in which players rampage through Glastonbury wiping out solicitors pretending to be hippies for the weekend.

Manhunt 3: Michael Eavis Must Pay will be available from tomorrow with a 'U' certificate after the British Board of Film Classification (BBFC) commended the game and its "positive message for children".

Manhunt developer Tom Logan explained: "The game involves hunting down young professionals who spend 51 weeks of the year clawing their way up the corporate ladder at the expense of the planet, the poor and their very souls, who then think they can atone for that with a weekend of smoking dope, crapping in a muddy hole and listening to pop stars talk shit about the environment."

He added: "There are many interesting levels including the Pepsi Max One World folk tent, the Burger King Save the Rainforest tent and the Nike-Oxfam chill-out zone. All of which involve culling soulless, corporate yes-men dressed in brand new Sigur Ros t-shirts.

"My favourite part is reaching the Pyramid Stage and then chasing the lead singer from Keane with an enormous chainsaw while he tries to finish Somewhere Only We Know. It's a hoot."

The game culminates with the player discovering Glastonbury founder Michael Eavis in his vast farmhouse kitchen before shoving his upside-down head into the wood-fuelled Aga and beating him senseless with a Le Creuset omelet pan.

Wayne Hayes, BBFC spokesman, said: "We see so many video games that are gratuitous and nihilistic. It drives us to the point where we want to go out and kill people.

"But this game is positively bursting with goodness. After four hours of solid gameplay we wanted to go out and kill corporate lawyers and London-based public relations executives. And isn't that the sort of society we all crave?"