As Mr Brown moved to reassert his authority, senior ministers described the defacing of the chancellor as a ‘wake-up call’ to the rest of the cabinet.

According to senior Labour sources, Mr Darling arrived for a scheduled meeting with the prime minister shortly after 7pm.

He was shown into the kitchen where he found a relaxed Mr Brown dressed in a blue and white striped apron, about to put the finishing touches to a fresh batch of creme bruleé.

The prime minister, clutching his Faringdon Cook’s Torch, smiled at the chancellor and asked him to take a seat.

Mr Brown, still grinning, approached the chancellor and said: “You like losing things do you Alistair?”

Less than an hour later a clearly shaken Mr Darling, missing his right eyebrow, told a press conference: “I offered the prime minister my resignation but he has decided instead to remove a key part of my face with a blowtorch.

“Leaving me with just the one eyebrow will act as a constant reminder to uphold the highest standards in government and is a testament to his judgement and leadership.” 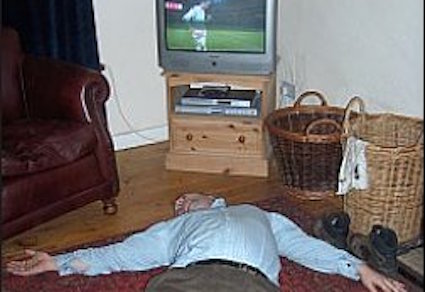 TRIBUTES are being paid to Scotland after the entire country laughed itself to death.

The alarm was first raised after thousands of phone calls and text messages went unanswered.

As RAF helicopters flew over deserted city streets, it was clear that the whole country had suffered a catastrophic abdominal rupture.

Wayne Hayes, a special constable from Northumberland, said: “We went into one house in Dunbar and found three men sitting on the sofa with huge smiles on their faces, still holding cans of 70 shilling. They seemed to be at peace.”

He added: “In a house near Edinburgh we found a man face down on the living room floor with his trousers and pants round his knees. It seems he may have been showing his bare buttocks to the television when he keeled over.”

Roy Hobbs, a civil engineer from Northampton, said: “I got a call from my friend Ian in Stirling. He was already laughing when I answered the phone, but after a few moments of the most vigorous and uncontrollable hilarity, everything suddenly went very quiet.”

Moving tributes are already being placed along the Scotland-England border with many mourners opting to leave a simple bag of chips or a deep fried bunch of flowers.