PRIME minister Gordon Brown has surprised Westminster by somehow managing to make the scandal over MPs' expenses even worse than it already was.

Mr Brown has proposed abolishing the controversial £24,000 a year second home allowance and replacing it with a £25,000 a year dragging-your-fat-arse-into-work allowance.

Under the old scheme MPs would have to submit receipts to the Commons authorities, thereby allowing the public to at least speculate on the titles and content of the pornography.

Under the new scheme MPs will get around £170 a day just for being where they are supposed to be, but crucially will not have to submit receipts, allowing them to use taxpayers' money to watch as many Hungarian donkey films as they want.

Julia Cook, professor of politics at Reading University, said: "I've been up all night racking my brains and I cannot, for the life of me, work out how he managed to fuck this up.

"The key task here was to stop giving MPs lots and lots of free money, or at least make sure that when they got the free money they didn't use it to take the utter piss.

"But what he has actually done is guarantee them even more free money while at the same time – and this is the bit that I love – making it even easier for them to take the piss."

She added: "For a man who has set new benchmarks in being an unmitigated fucking catastrophe, this could be the crowning moment of his career."

A Downing Street spokesman said: "I don't suppose you've got any jobs going? Please help me." 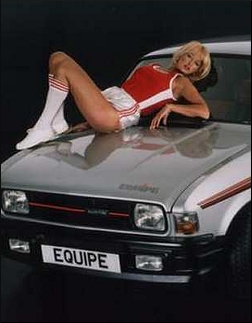 TANK tops, everyday racial abuse and Larry Grayson could all help tackle climate change, according to a report urging a return to 1970s lifestyles.

New research by the Institute for Studies shows the adoption of low aspirations and cheap foreign stereotypes could give Britain a carbon footprint not seen since 1976.

Professor Henry Brubaker said: "A PS3 consumes enough fossil fuel in one hour to keep a game of Simon going for 15 days, by which point we think it would sound like Rick Wakeman having a stroke."

Professor Brubaker added; "A fume-belching Austin Allegro taking a hollow-cheeked family to a shit-ridden campsite in Whitby is far greener than ramming four fat arses into a plane and then flinging it towards a vomit-soaked fortnight in Orlando.

"Everyone was much thinner compared to now. Look at Keith Chegwin. Thin as a whip on Swap Shop, but now he takes up three sections of a revolving door. We're recommending a dietary shift towards potato waffles and Texan bars."

The government insisted it was already adopting 1970s measures to combat CO2 emissions including a grinding recession and a violent, bigoted police force which keeps everyone cowering indoors for fear of getting a riot shield across the trachea.

A spokesman added: "All we need is a clapped-out Labour prime minister, a resurgent IRA and a Star Trek film. Wait a minute…"