DEPUTY prime minister Gordon Brown survived a backbench revolt last night after pledging to change his style of leadership and blah, blah, blah, you're not still reading this are you?

Mr Brown, who demoted himself in last week's stupid, pointless reshuffle, told a packed meeting of the parliamentary Labour Party that err… um… something about challenges… Have you seen Drag Me to Hell yet? Apparently it's very good.

As Mr Brown failed, once again, to understand that he was the problem, first secretary Lord Mandelson sat silently in the corner, stroking his badger while two large, muscular African men smeared handfuls of duck fat into his bare thighs.

For those of you still reading, the rebels then said something about Brown facing a fresh challenge in September by which time Sky and the BBC should have unveiled their autumn schedules, while Liverpool coach Rafael Benitez will almost certainly have been committed to a mental hospital.

Meanwhile Tory leader David Cameron repeated his call for an immediate general election, obviously forgetting there was a really good episode of Frasier on one of the satellite channels, though sources said it was okay because he has a DVD recorder.

Tom Logan, professor of politics at Reading University, said: "It was the episode where Eddie the dog is all depressed. Turns out he had lost his little doll. Great stuff. As for Brown and Mandelson and Cameron and the BNP. None of it matters. At all."

Margaret Gerving, a retired headmistress from Godalming in Surrey, said: "Oh, I stopped giving a fuck about this back in March dear. Have you seen Angels and Demons yet? Apparently it's rubbish."

Dutch to invent word for 'cricket' 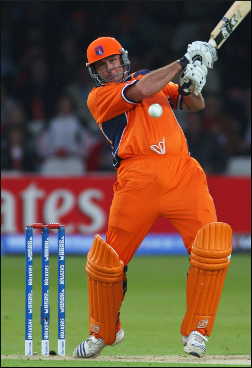 AFTER their surprise victory against England, the Dutch have admitted they had better invent a word for cricket if they are going to play it for a second time.

According to the interim Netherlands Association for Balls and Bats, early favourites are ‘kriijket’,  ‘krikkendam’ and ‘van der krikkenhooffen’.

A spokesman said: “Hey, crazy game, yes? We hit the ball, we catch the ball. It’s all good. So, do we win some points for hitting it into the crowd again?”

He added: “We really like ‘googly’. It’s a funny word and a funny game. I mean, it’s not like you are taking it seriously.”

Holland secured their surprise victory in the last over after England’s Stuart Broad experimented with a new form of fielding that did not involve the use of thumbs.

The ECB said the English squad reported feeling ‘odd’ before the game, after eating a basket of complimentary muffins sent by the Dutch side.

A spokesman added: “By the coin toss, half of them were discussing what an amazing colour James Foster’s car was and the other half were still in the pavilion, mesmerised by a SpongeBob SquarePants DVD.”

The spokesman warned that following the defeat this year’s Ashes series against Australia may have to be cancelled, adding: “At this rate somebody could end up getting killed.”