THE prime minister has refused to take part in TV debates unless all participants wear suits colour-coded to their party.

Under Conservative plans Ed Miliband would wear a pillar-box red suit, Nick Clegg would be in canary yellow, the Green Partys Natalie Bennett would be in bilious green and Nigel Farage would wear the purple-and-yellow stripes of a seaside entertainer.

Cameron, who has confirmed that he would wear a sober suit of midnight blue, said: The UK electorate, which is I believe composed entirely of hardworking families who believe in Britain, is too busy to remember the faces of five different white people.

Hence this solution, which will allow viewers to easily differentiate the parties without reference to our confusingly similar policies.

If Ed Miliband and Nick Clegg are unhappy wearing the colours of rampant communism and craven cowardice respectively, thats their problem.

The Labour leader responded: The prime minister is trying to take advantage of the fact that his party uses the colour of the sky, the ocean and calm, while Labours colour reminds people of blood, fire and ginger people.

Though I suppose everyone will have made their minds up by then anyway. 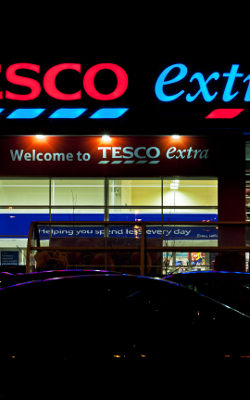 RETAILER Tesco has confirmed that it is shutting more than one in every 10 million of its UK stores.

The announcement is a bitter blow for the business, which at the end of 2014 had delivered on their mission statement promising there would be a Tesco visible from any given point in the UK.

But falling revenues means the retailer is closing stores, including the three on the uninhabited Orkney islet of Damsay and the controversial Tesco Express built in the whispering gallery of St Pauls Cathedral.

Tesco shopper Norman Steele said: Nothing can replace my local Tesco, its like a second home to me. A generic, corporate home.

But with the Tesco at the end of my road closed, where will I go when I need to be comfortingly told theres an unexpected item in the bagging area?

I suppose theres the Tesco Extra on the way home, or the Tesco Metro at the other end of the road, or at a push I could use the Tesco Express across the street.

But they wont replace the hole where there used to be a Tesco in my heart.

Tesco have yet to confirm whether the downsizing will affect the scheduled opening of their store at the International Space Station in August.