Clegg and Cameron had fingers crossed

THE last two years of government dont count because the coalition didnt Simon says, according to David Cameron.

As the coalition launched its Right, Lets Try That Again campaign, the prime minister has confirmed that they had just been warming up for the first half of their term and will do proper government stuff as of now, or possibly next week depending on how the Lords Reform Bill goes.

David Cameron said: Having to carry Nick around for the last two years making sure he doesnt touch any sockets has been like the longest ever take your child to school day so thats got to give us at least six months worth of do-­over.

Basically we mean everything we say as of…now. Nick, please, be quiet. Okay…now.

The launch took place in an Essex tractor factory, with Cameron managing not to look disgusted as he answered a wide range of questions from the assembled commoners while Clegg rode around on a digger with a gleeful expression.

The government is trying to reconnect with an electorate that recently chose stuffed animals and other household objects over Tory candidates. It has promised that for the next two years it will stop mucking about and try really, really hard to hand in some finished work that didnt sound utterly deranged.

Cameron acknowledged that difficult decisions lay ahead but made a firm promise to tackle that huge pile of papers by the fax machine first, so they could then look at all the unanswered phone messages received since 2010.

He added What most people dont realise is that it takes about three months to work out how to use the coffee machine and twice that to get your swipe card for the printer.

Al Qaeda 'getting its ideas from Viz' 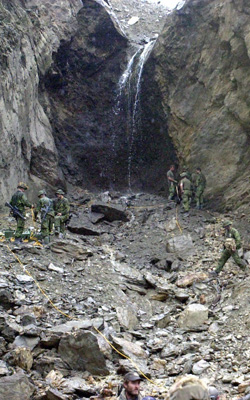 AN underpants-based terror plot has fuelled speculation that Al Qaeda is being inspired by adult humour comic Viz.

CIA operatives in Yemen have seized a crude underwear bomb, a device which they believe was based on the comic strip Felix and His Amazing Underpants.

Agent Tom Logan said: “We know that Bin Laden was a Viz subscriber. In fact that’s how we finally located him, by getting his address from their mailing list.

“His favourite characters were Biffa Bacon and Sid the Sexist. Bin Laden regularly wrote in to Top Tips but never got one published, a source of deep disappointment that fuelled his animosity towards the West.”

Tom Logan said: “Johnny Fartpants is interesting, we know Al Qaeda likes underwear stuff and his farts could easily be replaced by nerve gas. So that’s a possible technique.

“We’ve also told agents to be alert to highly-sexed obese, inexplicably bearded ‘women’ referring to themselves as ‘San’ and ‘Tray’ in thinly-veiled Middle Eastern accents and asking if they can take them to the Pentagon for a shag.”

During a 2011 raid on a cave in the Arabian Peninsula, a shoddy-looking robot vaguely resembling the character Tinribs was discovered.

Basically a small crate on wheels with a smiley face on a stick, the machine featured a voicebox taken from a child’s doll and adapted to say ‘Death to the infidel’.