Corbyn and the Queen discover they are both into The Jam

ALL tensions between Jeremy Corbyn and the Queen have been resolved with the discovery they are both massive fans of The Jam.

After meeting the Labour leader yesterday, the Queen said: “Straight away we were discussing our favourite tracks and asking each other if we’d seen them live.

“Whatever differences we may have had don’t matter now, given our shared love of the seminal 1978 album All Mod Cons.”

The Queen added: “I have to admit I was a bit wary of Jeremy and his desire to abolish the monarchy, but if he’s into The Jam he must be alright. Who knows, maybe he’s got a point?”

Corbyn said: “If you’d asked me beforehand to predict the Queen’s favourite Jam song I’d probably have said  Down in the Tube Station at Midnight, simply because she’s mentioned in the lyrics. But it’s actually English Rose, which I think is rather lovely.

“She is the English Rose and long may she reign over us.”

Corbyn and the Queen now plan to attend a mod all-nighter in Brighton, travelling on the Labour leader’s heavily modified Vespa. 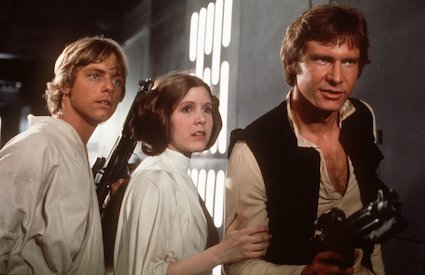 LUKE Skywalker does not appear in the new Star Wars movie because he is the worst character in the series by far, it has been confirmed.

Director JJ Abrams responded to rumours that Skywalker is the villain of the new trilogy by saying they told Mark Hamill that just so they could cover him up with a hood.

He continued: “Luke Skywalker is a farm boy in a strop who sees the greatest wonders of the galaxy and compares them all to shooting womp rats in a desert.

“And his hair is weird. His aunt was probably cutting it and she got killed by stormtroopers, but he should have sorted it out by Return of the Jedi.”

Abrams revealed that Skywalker will make his first appearance in the third movie in the trilogy, in 2019, where he gets one line before being sucked out through an airlock and exploding in space.

Fan Joseph Turner said: “To be fair, he never had the charisma of the beeping robot or the big hairy fella.”