JEREMY Corbyn is finally starting to like being Labour leader.

Corbyn stressed that although he never really wanted the job in the first place, the last few days have been ‘rather splendid’.

He said: “I’m feeling really good about myself right now. I’m leaping out of bed and just raring to go.

“I’ve got an endorsement from Danny DeVito and an old-Etonian, Tory prime minister is on the brink thanks to one of the particularly nasty aspects of capitalism. It is great to be alive.”

Corbyn added: “I know I’m not going to win a general election, but I genuinely thought this job would be one long pain in the arse.

It was 'Adam and Steve' all along, confirms Pope 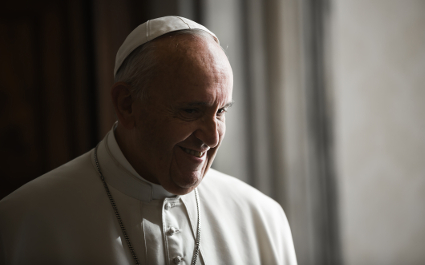 CLOSE examination of the Bible has revealed  it was ‘Adam and Steve’ in the Garden of Eden the whole time.

Pope Francis revealed that ‘Eve’ was just a mistranslation and that fundamentalist Christians who oppose gay marriage would now have to change their placards.

The Pontiff said: “Turns out Adam was lonely, so God made him a companion in his own image. And being tempted by a snake? We’re just embarrassed we never spotted the symbolism anymore.

“Also God and Lucifer were a couple who fell out, Jesus was the first bear, and we got the Sodom and Gomorrah parts almost completely backwards.”

He added: “It explains the church’s longstanding disgust and disdain for women, because technically speaking they’re not part of His creation at all.

“Yes, we probably need to do something about them. What’s that verse in Exodus, about not suffering witches?”