Coulson 'knew he was going to resign' claims Guardian

FORMER Number 10 press chief Andy Coulson must have known about his own resignation, the Guardian claimed today.

In a 4.5m page exposÃ© the paper revealed that Coulson hired a private detective to hack into his mobile phone and then send him transcripts of what he had said.

According to the paper’s investigation, if Coulson has seen the transcripts then he would have known that he discussed resigning as early as last week, but deliberately failed to tell the Fire Brigade.

Coulson said today: “I had no idea I was going to resign. The only people who knew were the private detective, my wife, the prime minister and all the people who report directly to me and do exactly what I say as if their job depended on it.

“I am disappointed in all of them but I have found that I can no longer fulfil my role in Downing Street and deny asking someone to find out what Andy Gray said to some bloody sports agent’s personal assistant and whether Sienna Miller is secretly into pasty, dark haired Essex boys.

“And I also hate working with Vince Cable. He’s a fucking arsehole.”

Coulson has been under intense pressure from the Guardian after spending four years giving News of the World readers exactly what they wanted and then having the sheer affrontery to get a well paid job working for someone they disagree with.

Meanwhile Guardian editor Alan Rusbridger has launched a new campaign calling for Coulson to resign from his next eight jobs.

He added: “I will only give up when Rupert Murdoch shuts down Fox News and then sends me a lovely card saying he has been wrong about everything all along.”

Bill McKay, a man who was stopped in the street in Peterborough, said: “Who’s Andy Coulson? Really? Is that all?”

From the vaults:
Guardian ‘Hacking Phones To Get Incredibly Boring Stories’
News Of The World Readers Could Not Care Less

What gives? asks Tony the Prick 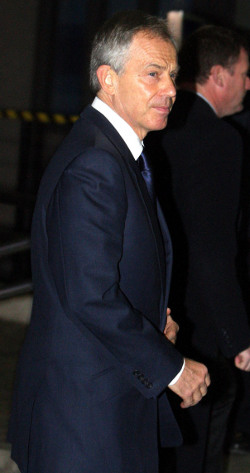 GOOMBA sleazeball Tony ‘the Prick’ Blair was being questioned today about his role in the Iraq war scamola.

The neocon kingpin was picked up in cental London this morning, but immediately denied killing lots of people and making huge amounts of money.

He said: “I am a businessman of some standing in this community. I go to church. I pray at the feet of the Blessed Mother and you drag me in here like I am some paisano with dirt under his fingernails.

“I should wish for you to be found in the trunk of a car with a bullet in your skull if I was a man of violence which I am not.”

Blair, also known as ‘Tony Blair Associates’ and ‘The Tony Blair Faith Foundation’ insisted the war was ‘all above board and legitimate’.

He said: “War? What war? It was piece of business, a transaction. What am I, some fuckin’ bustavagone?

“I get a call from a guy. He needs a thing. I say sure, no problem, long as I get my beak wet.

“I’m not gettin’ any younger and I gotta put bread on the table. JP Morgan don’t exactly hand out consultancies like they is communion wafers.”

The authorities presented sworn testimony from former associate Jack Straw who claims he only supported the war because Blair drugged him and then placed him in bed with a dead male prostitute.

But Blair dismissed the allegations, adding: “Hey, G-man what can I tell you? Go talk to my lawyers. But not Goldsmith ’cause he’s a fuckin’ mook.”

Tony the Prick is the biggest catch among more than 100 suspects who have been questioned including Gordon ‘Spiderman’ Brown and Alastair ‘the complete and utter psychopath’ Campbell.