THE Daily Mails successful campaign to charge for plastic bags has confirmed that the tabloid newspaper is effectively running the country.

Until now, few had realised the Mail is directly responsible for government policy, rather than merely influencing it via a torrent of mean-spirited reactionary drivel.

Prime minister David Cameron said: Most of our policies are now geared to Mail readers, for example banning all sitcoms except Dad’s Army and making women accept the blame for everything.”

Its funny really, because if anyone else had thought of charging for carrier bags, the Mail would have accused them of being extremist environmental loonies with rich parents and grubby dreadlocks.

Other legislation demanded by the Mail includes closing down the NHS because doctors are a bit posh and full of themselves, giving a medal to homeowners and making Kelly Brook the patron saint of ample curves.

Daily Mail editor Paul Dacre said: I dont really give a shit about carrier bags. I hate everything, so if a few preening swan bastards choke on them, so much the better.

However its vital to remind the government whos boss from time to time. Next week I might make Cameron dress as Shirley Temple and sing On The Good Ship Lollipop while I sneer at him.

Bored office workers can't remember what they did before the internet 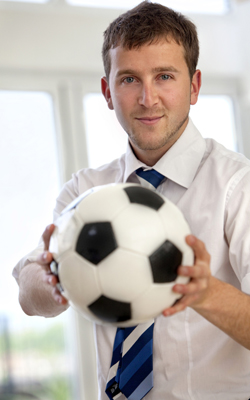 SKIVING desk workers can no longer recall how they got through the day before they had websites to look at.

She said: “I couldn’t get on the web. I couldnt check Facebook. I couldnt even send personal emails.

“I was sitting in front of a fancy typewriter with nothing to do but work.

I realised this yawning abyss of clockwatching horror was what the older generation faced every day. No wonder they all smoked  heavily. Why live longer?

60-year-old Bill McKay said: I’ve been surfing Gawker every day for so long than it seems to have wiped my long-term memory. However I think we’d get drunk at lunchtime, and of course sexual harassment was all the rage back then, which killed a lot of time.

Other popular displacement activities of the past included long personal phone calls, making paperclip chains or rubberband balls, and embezzlement.

Company head Roy Hobbs said: They were hard times, very hard. The young people of today dont appreciate how easy it is to avoid work now.

Back then it was a full-time job.