DIRTY bombs are nowhere near as dirty as some of the stuff you can get on cable, home secretary Jacqui Smith said last night.

In a keynote speech on security and immigration, Ms Smith said that 21st Century Britain is like a lone female driver who has broken down in the middle of nowhere and is waiting for a greasy, inarticulate mechanic to turn up and fiddle around under her bonnet.

The home secretary told the Fabian Society: "He'll pop my hood and polish my rivets and then I'll ask him to pull out the dipstick.

"I'll wipe it with a clean, dry cloth and then we'll find out exactly how much fluid there is in my tubes."

Ms Smith said terrorism could only be defeated if people from different communities were willing to put aside their grievances and work together, much like the all-female cast of Strap-On Gang Bang 7.

The home secretary also outlined plans for a renewed crackdown on economic migrants, adding: "Unless of course it's some dirty big Polish plumber who's just desperate to show me what he can do with his plunger.

"Okay, so his English is not very good and his national insurance contributions might not be up to date, but at least he can flush my u-bend and tighten my leaky flange."

Windows 7 To Include Punch-Screen Technology 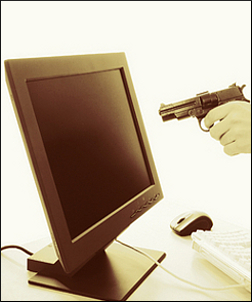 MICROSOFT has confirmed that its new Windows 7 operating system will allow users to interact with their computer by punching it in its bastarding face.

The software giant said it had invested hundreds of millions of dollars in state-of-the-art features which will help users communicate their rage in a physical way which the computer can then analyse and respond to, instead of just designing a programme that was not a frustrating, overpriced sack of shit.

IT expert Tom Logan said: "Windows 7 will offer real-time, multi-platform cross-functionality, which basically means it will be useless not just on your PC and your laptop, but on your mobile phone as well.

"But the key difference from Microsoft Vista is that it will let out pathetic, hitch-pitched yelps when you batter it repeatedly with a shoe."

Logan added: "If punch-screen is a success we could eventually dispense with the keyboard and mouse altogether and you'll be able to accidentally wipe all your files just by screaming at the monitor and waving your arms about like a maniac."

The technology has also been incorporated into Microsoft's 'WifeAlert', an add-on which will allow furtive users to instantly replace hardcore Malaysian pornography with the RSPCA website via nothing more than a panicked slap of the hand.

Meanwhile the BBC said it would explore ways of integrating punch-screen with its live broadcasts.

A spokesman said: "You could spank Tim Lovejoy in the face during Something For The Weekend and via a series of high-speed interactive feeds we could make sure he felt it."