Donald Trump's guide to being the perfect guest

WHEN you’re the world’s most important leader, with the highest poll numbers, everyone wants you to visit their country. I have a very good relationship with the Queen of England. Here’s how:

Britain doesn’t have Twitter. It doesn’t even have telephones. Respect your guests by not using technology they’re not familiar with. If you’ve tweeted ‘Sadiq Khan is a stone cold loser and short! (I’m tall)’ then it won’t appear on the front page of the London Times until Thursday’s edition goes to print.

The mayor of New York, great guy, Ed Koch, Democrat, I used to give him gifts in exchange for building contracts. That wasn’t illegal because now I’m President. Bring gifts now – signed copy of The Art of the Deal, an apartment in Trump Tower, a pure-bred Siberian lynx – then move in and buy England once it’s weak.

Don’t stink out the bathroom

Use the air freshener and open a window if you have to. Buckingham Palace has plenty of bathrooms. Blame it on your weird son-in-law.

Don’t complain about the facilities

In a backward country like Ye Olde England there may not be basic facilities such as Fox News. Instead of complaining petulantly keep channel surfing until you find something educational, like a UFO documentary.

Of course I invite my hosts to stay with me. I have the best manners. Me, Her Majesty Elizabeth, Lord Farage and that Kate, not my type, are going to play golf in Florida. 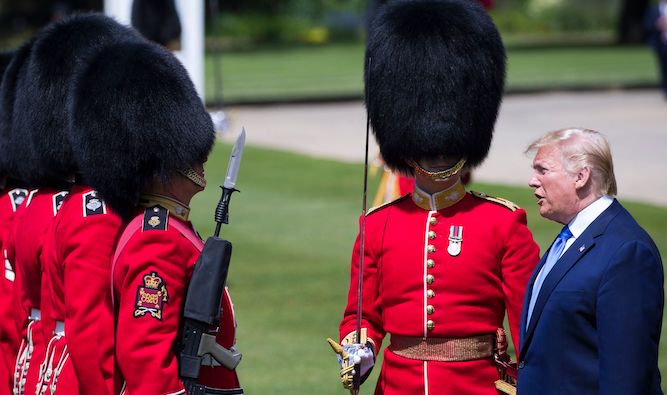 A BEARSKIN guard outside Buckingham Palace has admitted struggling to keep a straight face at the preposterous thing on President Trump’s head.

Grenadier Guard Martin Bishop, who has seen it all and never cracked a smile, confessed that he was a hair’s breadth from collapsing into hysteria at the bizarre head-topping creation.

“I’m used to keeping a straight face. In the summer I get 200 tit-flashes a day. But I could feel the laughter bubbling in my throat at this absurd bullshit on this man’s head.

“Why not just get a perfectly sensible hat, for God’s sake? Why draw attention to yourself when you could wear something practical and inoffensive like an 18-inch tall, one-and-a-half pound Canadian black bearskin cap?”

He added: “I’m actually bald under this. I deal with it.”