DUP deal to focus on Brexit, pensions and dinosaurs being a hoax

THE Democratic Unionist Party is ready to do a deal based on a ‘soft’ Brexit, a guarantee on state pensions and the total rejection of evolution.

As coalition talks with the Conservative Party began, DUP leader Arlene Foster stressed it was vital to focus on the key issue of why the Bible does not mention dinosaurs.

She said: “Yes Brexit, pensions, all that stuff, fine. But this dinosaur thing is absolutely central to everything.

“We know that dinosaurs are an evil hoax made up by homosexual atheists in the late 19th Century. But why do so many people still believe that these ‘gigantic lizards’ ever existed?

“According to our research the most passionate advocates for these so-called ’dinosaurs’ are gullible children, the gays and of course Roman Catholics, who will, frankly, believe in anything.

“We need to throw them all in prison.”

A Downing Street spokesman said: “We are very flexible on the existence of dinosaurs.” 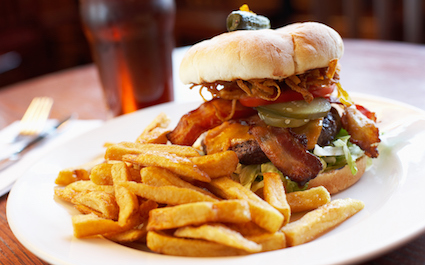 THE first sizzling hot chip on a plate has been eaten within seconds of arriving at the table, ruining the rest of the meal.

Nathan Muir simply could not wait to eat the chip, which only moments before was enjoying its second fry at 160 degrees, and consequently suffered burns to his lips and tongue.

“Delicious, really delicious, but a bit too hot. I’ll try another one. No, still too hot. Ow.

“I’ll put a bit of mayo on, that’s better. But it seems I can’t really taste anything now, and just when my burger that’s too big to comfortably eat is arriving.”

He added: “Damn you, chips. You have made a fool of me yet again. And we both know it won’t be the last time.”