The Labour leader revealed that he and Keith had been lifelong friends after meeting under a tree in the Milibands’ back garden when they were both nine years-old.

He said: “Me and Keith enjoy the football matches, the lager and those sandwiches that have lots of bacon in them.”

Miliband nodded and laughed before adding: “Keith was just saying that I’m a ‘twat’ when it comes to the sandwiches. That’s very Keith.

“He also said that life under the coalition is really awful and I’m the only person who understands.”

Miliband nodded again, while looking serious, and then said: “Keith was just telling me that some friends of his had been thinking of voting UKIP until he told them what a great guy I was. Thanks, chief.”

The Labour leader then held his right arm out as if it was around someone’s shoulder and added: “Keith and I are also working on a new law to stop decent boozers going all poncey.” 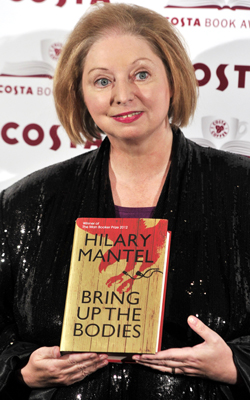 NOVELIST Hilary Mantel has confessed to the murder of Margaret Thatcher.

The book contains a rifle that screws together

The writer admitted her short story The Assassination of Margaret Thatcher was inspired by actually carrying it out.

Mantel said: They covered it up at the time because they didnt want everyone knowing the security services had been outwitted by a middle-aged woman with eccentric hair.

I bought a big gun from the classified section of Mercenary Quarterly, rented a flat opposite the hospital then sat munching on Ginsters pasties until the Marge Simpson-esque silhouette of Thatchers head appeared in the window.

Mantel said she had since done a number of contract killings under the codename The Pine Marten.

Ive actually lost count of how many, after youve popped a few its just like having a cup of tea.

She added: I dont really care if they bang me up, at least in prison I could crack on with some books without getting harangued by infant-brained Daily Mail readers who need every last apostrophe explained to them.

Also I would totally run things in prison, because I am hardcore. Everyone would call me ‘Duchess’ and appease me with cigarettes.”