SENIOR Labour figures are urging up and coming MP Ed Miliband to stand for the party leadership.

The group, understood to include former prime minsters Tony Blair and Gordon Brown, as well as Alan Johnson and Peter Mandelson, believe Miliband can rebuild the party’s support and appeal to middle England.

The relatively unknown MP for Doncaster North is the younger brother of former foreign secretary David Miliband and was described by the Guardian earlier this year as ‘one to watch’.

A source said: “He’s young, clever, incredibly charismatic and at the same time very down to earth. He also has some great policy ideas.”

Another senior figure added: “We need to move forward. It’s not about recapturing the energy of New Labour, it’s about finding that fresh, distinctive voice that will inspire confidence in aspirational middle class voters.”

Miliband refused be drawn on his intentions, but said: “I think I may be a bit too young and inexperienced, but I can’t deny that it would also be a great honour.

“Plus, I have done it before.” 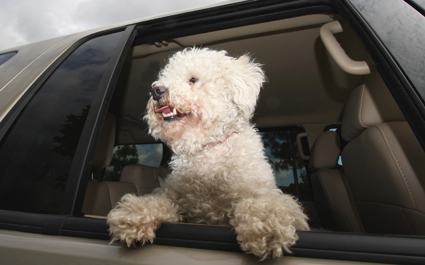 DOGS have confirmed that their most meaningful relationship is actually with cars.

Terrier Wayne Hayes said: “We’re friendly towards humans just because we’re using them to get to cars.

“Going in cars is the bollocks. Obviously leaning out of the window while going along is a joy, but also the seats are incredibly comfortable.

“And the smell of a recently-valeted vehicle is like nothing else on earth. So fresh and yet so synthetic, it sets my highly sensitive olfactory glands on fire.”

Doberman Emma Bradford said: “Thousands of years ago when wolves moved into villages, they did so in anticipation that mankind would one day invent cars.

“My personal favourite is the womb-like environment of the Ford Ka. It’s makes me feel so serene yet so territorial. If any strangers tried to get in with me I would bite their face off.”