FORMER UKIP leader Nigel Farage invited himself to a couple’s regular film night and ate a disproportionate amount of pizza.

Tom Logan and Nikki Hollis were settling down to watch the remake of The Magnificent Seven when the frog-faced politician knocked at the front door and slipped inside.

Hollis said: “He squeezed in between us on the sofa, prattling on about how he’s a ‘big player’ in ‘the new politics’ and helping himself to slices of our 13-inch pepperoni and mushroom.

“The little shit ate nine of the 12 slices and all the chicken wings. That was out of order, but then he completely ruined the film by talking over it with made-up anti-EU propaganda.

“After he’d spent two hours comparing himself to the Magnificent Seven. I really wanted to tell him to fuck off, but unlike him I’m quite tolerant and polite.”

Logan said: “He also droned on about how British pizzas were shit compared to American ones. He eventually left at 1.30am. I’m absolutely convinced he thinks we had a good time.” 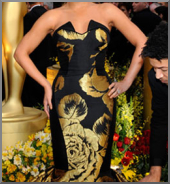 AN ADULT human has scolded herself after spending almost 30 seconds giving a fuck about some bullshit that happened at the Oscars.

Emma Bradshaw read the huge, banner headline on the BBC website this morning and immediately thought ‘that must have been embarrassing and awkward for the people who made La La Land’.

She said: “Then I realised I was still thinking about it, at which point I pinched myself very hard on the arm and shouted ‘get a fucking grip, woman!’.

Bradshaw added: “It’s an administrative error at an industry award ceremony. It should be a news in brief item.

“But it isn’t. Because we’re pathetic.”