Farage said his ‘life’s work was done’ after restoring British racial tensions to levels not seen since the 1950s. He said he was also satisfied with the referendum result.

He added: “The Trump campaign will be a big challenge. I’m thinking of using a photo of lots of Syrian refugees, but then claiming they’re all Mexicans.

“I’ve also got an idea for a swarthy looking Mexican and something along the lines of “Do you want this living next door?’. Plus, there seems to an increasingly anti-semitic tone to the Trump campaign. so that’s something I can really get my creative teeth into.”

Farage is also in negotiations with French National Front leader Marine Le Pen to design some posters to get everyone in France ‘nice and racist’.

He added: “I’m thinking of a big line of Syrian refugees, but with the slogan written in ‘Frog’.”

Stephen Crabb to personally cure every homosexual in Britain 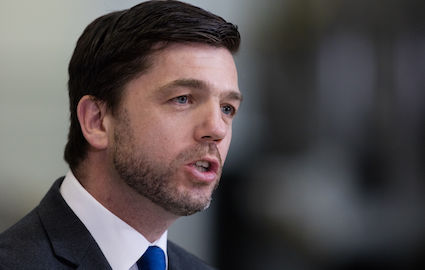 CONSERVATIVE leadership candidate, Stephen Crabb, has announced he will cure every homosexual in Britain within three years.

Crabb pledged to visit every gay nightclub, bar and book club as part of a ‘personal mission’ to cure every single man he can, even signing up to Grindr if he has to.

Crabb said: “I’m going to start by curing the hell out of the two gay guys on Gogglebox.

“And then Will Young. I might take the weekend off to cure him.”

When asked if might be able to ‘cure’ lesbians, Crabb was less enthusiastic.

He added: “I don’t know. I hadn’t thought about that to be honest.”