Forget independence and settle down to eternity of rule by English twats, May tells SNP

THE Scottish Nationalists must forget independence and accept permanent rule by English twats they did not vote for, Theresa May has said.

The prime minister told the BBC that the SNP must abandon a second referendum and admit that Scotland’s future belongs to Tories who see it as a big grouse moor where the Queen occasionally holidays.

She continued: “The Scottish Nationalists keep harking on about independence, as if it would magically solve the issue of their country being subject to the whims of whoever the Home Counties vote for.

“They should deal with the real problems, like upcoming cuts to police, education, and council budgets which will be especially large in constituencies that have never swung Conservative.

“I don’t want to criticise the SNP. Indeed, it’s thanks to their rise that the UK enjoys unfettered Tory government which I’m confident will never end.

“But I think they’ll find that, contrary to that blue-faced man’s famous speech, we can take their freedom. And the other thing.” 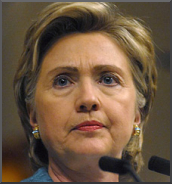 Just over a month into her presidency, Clinton is also facing investigations by Republicans into her choice of  hats, a mean look she gave somebody, and the way she holds her coffee cup.

“Wearing shoes that were blue and brown, and to do so less than two-thirds of a mile away from a war memorial, was an act of gross disrespect to our brave troops who I personally worship as gods.”

Gowdy added: “If Donald Trump had been elected then we’d be hitting him just as hard.