THE G7 meeting in Italy has rejected Boris Johnson’s plan to sneak into the tuck shop late at night and make off with sweets, it has emerged.

The foreign secretary interrupted discussions of the humanitarian crisis in Syria to outline the sweet-theft scheme, insisting it would be a ‘wizard prang’.

Italian foreign minister Angelino Alfano said: “We rejected the proposal to ‘pinch loads of tuck and scoff it in the dorm’ on the grounds that it was not G7 business and extremely juvenile.

“I don’t even think there’s a ‘tuck shop’ in this high-end hotel. There’s a small convenience store in the lobby, but it’s not really appropriate for government ministers to break in and commit petty theft.

“Also everyone here has a generous expense account, so we can easily buy as many sweets as we like, even a whole jar of fizzbombs.” 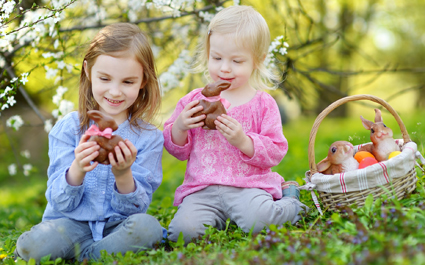 MIDDLE class parents have expressed concern at the lack of dark chocolate Easter eggs for their children’s refined palates.

Despite an abundance of creamy milk chocolate eggs, comfortably-off Guardian-type parents believe manufacturers have failed to cater for the growing demand among the nation’s most difficult children for bitter chocolate.

Mother Carolyn Ryan said: “My Archie relishes the rich and complex tones of dark chocolate and has done since his fifth birthday when I banned all dairy, gluten and anything with a fondant centre.

“And supermarkets can’t say it’s due to a lack of demand. I know at least ten six-year olds who would kill for a dark chocolate bunny infused with cardamom.”

Eleanor Shaw, speaking from a Waitrose car park, said: “My seven year old daughter requested a minimum of 80 per cent cocoa solids in her egg this year, which is proving unbelievably difficult to source.

“At this rate I’m going to have to give her marinated olives instead.”