FORMER Manchester United footballer Gary Neville has been providing live commentary on the ongoing Brexit negotiations. Here are some highlights.

“They’re walking in there with no plan, no new signings, the same attitude that got them in such trouble before the break, and these European boys are sharper than ever. They’ll take us apart.

“A disastrously ill-timed intervention from Boris there. He’s been coasting on his reputation for years, and now he’s getting found out with every move. Sell him? Who’d buy him?

“This team’s got their heads up their arses. Pardon the language, but they’re never going to score if they don’t know where the goal is.

“The Brexit fans at home must be livid. How can you turn out like this for a series of key talks? Theresa May talks a good game, but you’ve got to spend to compete at this level and she just hasn’t shown the commitment.

“Davis’s team deserve an absolute battering. The general attitude and lack of respect is disgraceful. Relegation to the Third World wouldn’t be undeserved on this performance.” 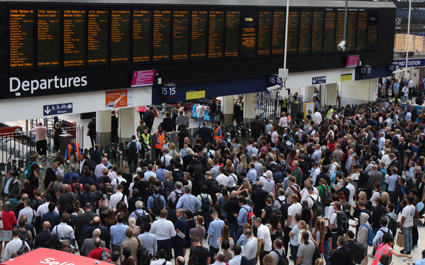 COMMUTERS attempting to use Waterloo station have been loaded into containers and shipped 4,200 miles away.

Work has overrun on an £800m station upgrade, meaning train operators have been left with no choice but to transport passengers to a small island in the South Atlantic, never to return.

Commuter Helen Archer said: “Everything was fine until the announcer informed us there was no platform available and alternative arrangements had been made, which turned out to be being loaded into shipping containers subsequently put onto an RAF Hercules and flown to Ascension Island.

“I’ve called work and told them that I’m roughly midway between Africa and South America, and they have been very good about it – everyone’s been through something similar. We might get a free cup of tea in a bit.”

A spokesman for Network Rail said: “For customers’ convenience it has been necessary to use a rail replacement service which has sent them into permanent exile from the UK. They have been given vouchers for a sandwich.

“The revitalised Waterloo will have longer platforms, more capacity and a Space.NK.apothecary offering the world’s best beauty products. So it will be worth it.”