Grant Shapps confesses to second job as The Equalizer

CONSERVATIVE chairman Grant Shapps has admitted he had a second job as a vigilante delivering street justice while an MP.

He said: “I was so focused on my role as an angel of mercy to those labouring under the yoke of oppression, I forgot to declare it to Parliament.

“Sometimes I’d arrive in the House still holding a smoking M1 carbine, fresh from mowing down drug dealers intent on turning a single mother’s home into a crack den, and have to claim I’d found it in Parliament Square.

“Anyway, I gave it up after the embarrassing discovery that a dodgy businessman grifting small businesses with bullshit IT software was actually me under another name.” 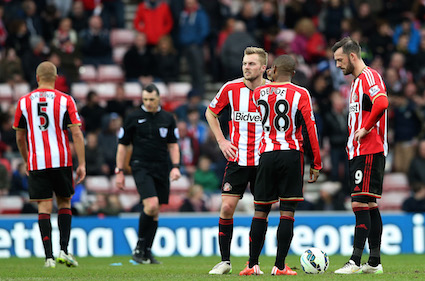 SUNDERLAND wowed fans with their unique brand of no-touch football during a 4-0 home defeat to Aston Villa.

While Villa’s players employed a more traditional style, often taking multiple touches and then passing, their opponents trialled a groundbreaking tactic, deftly avoiding any contact with the ball for the entire match.

Fans said they were honoured to witness the evolution of a new style of play which takes Spanish ‘tiki-taka’ one-touch football to the next logical step.

Sunderland fan Tom Logan said: “Even when it would’ve been easy to take control of the ball and dribble it up the pitch or find a short pass, the Sunderland players stayed well out the way. It was masterful.”

By the end of the game the devastating tactical masterclass had taken its toll on the Villa players who could only seek scant consolation in their four measly goals.

Sunderland manager Gus Poyet said: “It’s more than just not making contact with the ball. It’s the feeble lunges, the desperate shouting and the placing of hands on hips.”