Griffin Is First Nazi Banned From Palace Since Edward Viii

NICK Griffin last night became the first Nazi to be told he was not welcome at Buckingham Palace since King Edward VIII in 1936.

The BNP leader’s invitation to a palace garden party was withdrawn after it was decided the monarch’s official residence should not be a haven for fascists. Again.

Amid angry scenes, Mr Griffin was turned away at the palace gates as the Duke of Edinburgh became involved in a shouting match with the Queen’s head of protocol before being dragged away by the Grenadier Guards.

A spokesman said: “Buckingham Palace has never been a platform for individuals with fascist political views. Okay, maybe once or twice. Alright, five or six. Okay, about 20 or 30 times. Fine, 300 times. But that’s it.”

Meanwhile, Sir Denys Finch-Hatton, a former permanent secretary at the Foreign Office, insisted it was a common misconception that King Edward VIII abdicated because of his love for some ghastly American tart.

“Of course he could have married her – all we had to do was change the law. Would have taken two minutes.

“No, the King was told to leave because by 1936 it was clear Britain would inevitably be at war with Germany and it would probably not be in the nation’s best interests if the commander-in-chief of the armed forces was a Nazi.”

He added: “The prevailing consensus –  one that I eventually came to agree with – was that being in charge of both armies would have given the Germans an unfair advantage.”

Lady Margaret Gerving, who made her dÃ©but in 1934, said: “When Edward was Prince of Wales one had to be a Nazi to get into a Buckingham Palace garden party.

“One had to be up to date with all the latest racial theories just in case the Prince wanted to test one’s loyalty to the thousand-year reich.”

She added: “They were such jolly affairs. The Von Ribbentrops would always bring a lovely Victoria sponge with a swastika on it and the slogan ‘cake makes us free’.

“And then that dashing Mr Moseley and the proprietor of the Daily Mail would stand on a table and do their wonderful impression of an old Jewish man having sexual intercourse with a pig.” 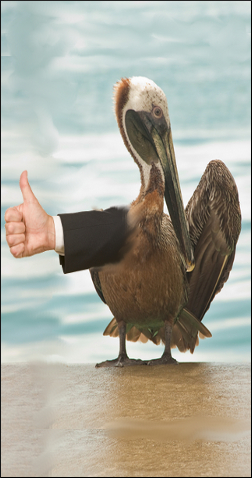 OIL giant BP has been accused of manipulating an image of a Gulf of Mexico pelican to show the bird giving the ‘thumbs-up’.

The image accompanied a press release earlier this month from BP, headlined ‘We’re having the time of our lives, say Louisiana pelicans’.

But close examination of the image has revealed that it may have been a sophisticated attempt by the company to give the impression that pelicans love being covered in oil.

The press release stated: “While BP is doing everything it can to deal with the environmental incident in the Gulf of Mexico, the local pelicans are in no hurry to see things get back to normal!

“And while pelicans cannot speak English – not yet anyway! – they have made their feelings known by giving an enthusiastic ‘thumbs up’ to our photographer before licking more high-grade oil off their deliciously greasy plumage.”

The release continued: “‘According to Nathan Muir, BP’s senior vice-president in charge of pelican community liason, ‘these birds wish it could be oil spill day every day!'”

But digital imaging expert, Julian Cook, said:  “If you look at the edges of the pelican you can see a slight change in the depth of the macro-pixelation.

“That’s been done by someone who has clearly been using Photoshop 8.2.3 for less than a fortnight.

“Meanwhile the light is hitting the sleeve of the jacket and the pelican’s bill at two completely different angles. That’s physically impossible.