How to cry, by Matt Hancock

ORDERED to cry on telly by Downing Street PR, even though you’ve spent nine months feeling so sorry for yourself you no longer have tears left? Let me help.

There’s nothing better for conjuring tears than the fumes of a fresh allium, and nothing more natural for the health secretary to be doing when appearing on breakfast TV than preparing lamb rissoles on the desk, just out of viewers’ sight. Every tear genuine.

Dab your eyes with VapoRub

If you want that authentic red, just-cried afterglow, try laying on the Vicks like a 90s raver. Your obvious discomfort is sure to look extremely touching on camera, and not staged.

If, like me, you’re incapable of feeling emotion for your fellow Britons, then try thinking about a childhood pet that died tragically. I wasn’t allowed one because I fit the psychological profile of a serial killer, so I like to imagine a turtle named Jeremy who was crushed under the Brexit bus.

Focus on your patriotism

Any true Brit can be brought to tears remembering great moments like VE Day, the 2012 Olympics or Bucks Fizz winning Eurovision in 1981. Help yourself along by pinching and twisting your testes.

If emotion isn’t your strong suit, try ordering a five-chilli chicken vindaloo. The guilt you feel about the immigrants who prepared it who’ll soon suffer racist violence and deportation thanks to you, and the fumes you’re inhaling, will soon bring the required saline solution to your eyes.

Think about being fired

If all else fails, imagine the sweet moment sometime next year when Boris Johnson tries to swerve a public inquiry into Britain’s Covid response by firing you and sending you to the peace of the backbenches. You’ll be in absolute floods. 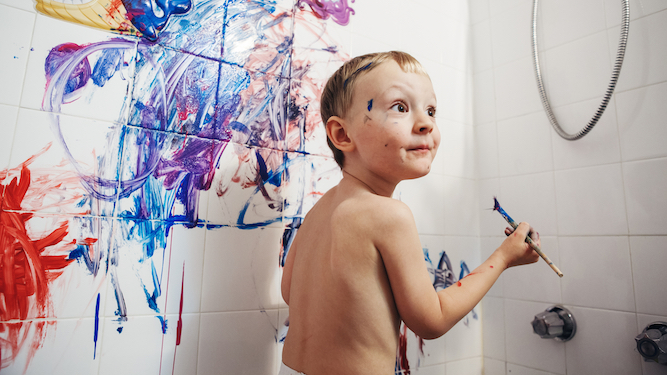 EVER found yourself bellowing ‘Who filled this salt-shaker with Lego?’ and realised that being a parent has taken you to sentences you’d never have said otherwise?

Your bum is not a pocket

Toddlers too horrified to wipe their own bottoms believe that the rest of humanity has foolishly overlooked their potential for on-the-go comfort, frequently wedging their hands there. With predictable consequences.

No, you can’t take the radish to bed

In an unfamiliar world, is it really surprising that a child would find a radish friendly? And, because it’s cute, that the child would be indulged and allowed to set the radish a place for dinner? And want to take it to bed, not realising that crosses the line, and throw a massive tantrum?

There is no such thing as ‘breakfast pudding’

Kids get a sweet treat after lunch and after dinner, so why not extend the logic? Except they’ve just had pancakes and honey for breakfast so put that f**king cookie down.

Stop chimneying up the bloody doorframe

To older children everything’s a climbing frame, and the first time they scale a doorway by bracing themselves on the sides you’ll probably be impressed. Less so when they’re unable to walk through a door without doing it again 12 times a day for six months.

Why is there glitter on the dog?

It is not easy to get glitter out of a carpet. It is a great deal harder to get it out of a dog.

We do not lick the floor, the toilet, the baby or the postman

Children enjoy exploring their tactile environment, sometimes with their tongues. Children then also wake up at 3am covered in their own vomit. These things are related.