I am shit at this, admits Clegg

NICK Clegg has refused to resign as Lib Dem leader but has admitted he is absolutely shit at it.

The self-styled deputy prime minister said stepping down would be pointless and that he should continue even though he was probably going to get even worse.

He added: “I had the first vague inkling that I was very bad at this about two years ago when I realised I hadn’t made any difference to anything.

“But when I agreed to debate Nigel Farage about Europe, on television, I suddenly thought, ‘fucking hell, I really don’t have a clue’.

“Anyway, I’ve had a chat with Vince Cable and we agreed that he’s shit at his job too and would be just as shit at my job as I am. 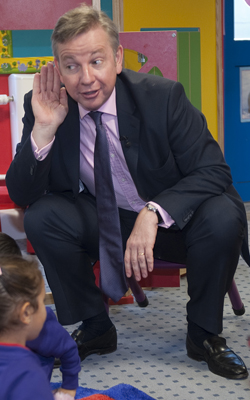 Gove said dropping modern classics like To Kill a Mockingbird meant there was now room on the curriculum for the 200 or so books he has published on Kindle, of which 11 copies have been sold for 49p.

Teenage boys will love my Horatio Hove novels, about a dashing cavalry officer in the Crimean war who has a sizzling affair with Lilly Langtry even though he looks like a glove puppet frog.

I researched it by watching Sharpes Rifles and Master and Commander, so its 100 per cent historically accurate. The best bit is where Horatio sinks all Napoleons aircraft carriers.

Schools will also be required to purchase multiple copies of my fantasy epic Lord of the Thrones.

Kids will love it because its full of wonderful, imaginative ideas like magic swords, quests and talking dragons, and the reader gets a nice break from the serious bits thanks to a dwarf who gets into funny situations.

I’ve even done a book for girls, Hattie the Happy Housewife.

Teacher Tom Logan said: I read one of Goves thrillers, Day of the Cultural Marxists, but I found the story about a group of terrorist teachers trying to assassinate David Cameron a bit farfetched.

Most teachers get confused by a Banda machine, so I doubt theyd be able to steal RAF Tornadoes and attack the House of Commons.