FORMER chancellor George Osborne believes he is the perfect choice to chair the Northern Powerhouse because he detests the South and its people.

Osborne, who has spent the last two months brooding in semi-darkness in his Cheshire constituency, has emerged to declare himself ‘150 per cent Northern’ and London’s greatest enemy.

He continued: “Who needs them, with their big glass offices and their prosperity, when we Northerners have something far better. Grit. Authenticity. Near-constant rain.

“I may have been born, educated and lived all my life in the South, but the backstabbing bastards down there never really believed in austerity, while up here it’s a way of life.

“Gammer Osborne, as I would like you to call me from now on, is never happier than standing on a Lake District hill with a plastic cup of black peas, soaked in drizzle, thinking about what effete wankers all Southerners are.

“Also, can I just say I love Barnsley?”

Stephen Malley of Manchester said: “He’s a fancy plum-voiced tosser who sips his brew like a ponce and doesn’t even know any Roses B-sides.

“But fuck it, he genuinely hates Southerners so he’s in.” 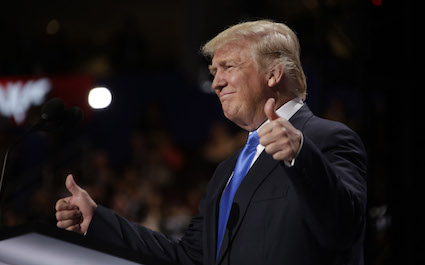 DONALD Trump is in fine, thin-crust-loving shape, according to Dr Oetker.

The frozen pizza physician released his statement on the Republican candidate after criticisms that a previous medical evaluation by Dr Pepper was less than exhaustive.

Dr Oetker said; “I can confidently say that Mr Trump is in even better shape than the perfectly circular slices of sausage on my Ristorante Pepperoni Salame, available near you.

“I ran extensive tests on Donald, such as comparing his resting heart rate with his heart rate when shown a delicious Ristorante Pizza Speciale fresh from the oven, and checked his arteries for oozing mozzarella.”

A controversial figure in the medical world following his claim that all round foods are high in antioxidants and Goodfellas Deep Baked Pan causes Lyme disease, Dr Oetker has prescribed Trump a course of calzone and no exercise.

He added: “Of course Obama favours Hawaiian pizza, with pineapple on it, because he hates America.”