TONY Blair has revealed he still has weekly conversations with Jesus and talks about everything from the Middle East peace process to the fortunes of the England football team.

But the former prime minister said he played down his relationship with Jesus while in office fearing he would be labeled 'a nutter' for believing a man was born of a virgin, turned water into wine and walked on the sea, before being killed and then coming back to life.

Mr Blair said: "I remember the first time Jesus and I chatted. I was having a cup of tea, listening to some early REM and reading a book about Kevin Keegan.

"I looked up and there was Jesus, sitting across from me, just gazing and smiling at me with his head resting in his hands.

"He said to me, 'what's up Tony?' and I said, 'Jesus, did you really raise people from the dead?'

"He said that wasn't the half of it and that they'd left out loads of even more amazing stuff – I'm talking dragon fights, photon torpedoes and turning rubber into cheese – because no-one would have believed it.

"He then told me that I was special and that I would lead something called the 'Labour Party'.

"He said that hundreds of creepy little guys just out of university would see me as their personal saviour and that it would make me feel really good."

The former PM added: "He then went on to tell me that not only was it OK to sell seats in the House of Lords, but that I should lie about it too.

"And he even gave me a ball-park figure for the number of innocent people who could be blown to bits in Iraq before he would become concerned."

Blair's comments come just days before Gordon Brown is expected to announce an overhaul of the government's belief in miracles. 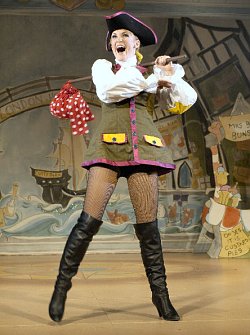 BRITAIN'S favourite pantomime stars are demanding the right to litter their performances with profanity and smut.

The move follows criticism of Lucy Pankhurst, the 13 year-old star of Aladdin at Dorking Community Theatre in Surrey, who shocked her audience by replying: "Oh no he fucking isn't, you bunch of shits".

The teenage prodigy was also accused of ruining the cermonial switch-on of the town's Christmas lights when she referred to the Mayor and his wife as a 'pair of tubby bastards'.

But panto stalwarts have leapt to her defence, insisting it is time to add a new dimension to the festive shows.

Barbara Windsor, who as played every character in pantomime, said: "That little girl spoke for all of us when she hurled spiteful, unprovoked abuse at two dedicated public servants."

She added: "Last year the children at my pantomime were bored with the same old jokes. I have a very strong sense when it comes to audiences, and I think they wanted me to swear.

"Sure enough, when I was signing autographs at the stage door, a darling little six year-old boy looked up at me with sadness in his eyes and said 'Auntie Barbara, why won't they let you say pissflaps?'"

The campaign is demanding key script changes in time for the 2007 season including, 'fuck me, it's midnight already' and 'wish harder, motherfuckers'.

Meanwhile in Macclesfield, despite strenuous protests from councillors, the cast and crew of Jack and the Beanstalk have changed the name of the show to Beans is it? You Fucking Twat.