I'm not particularly good with numbers, admits Chancellor of the Exchequer

THE Chancellor of the Exchequer has conceded that ‘numbers, money, that sort of thing’ are not his strong point.

After scrapping a central plank of his Budget within a week, Phillip Hammond said he found large numbers ‘quite intimidating’ and would be ‘much happier running the department that looks after farms and stuff’.

He added: “I like farms and I like farmers. I like animals and the countryside and tractors. As long no-one asks me to count the tractors, or the animals, because that would be a nightmare.

“I’m going to ask for a transfer to the farm department, but in the meantime I’ll just stay here at the Treasury, avoiding anything that looks like arithmetic.

“Being Chancellor is not a particularly important job anyway as all the ‘economic numbers’ tend to look after themselves. Especially the very large ones.

“I have to say, it does help that we’re in the European Single Market what with all the trading and the jobs and stuff. It means I don’t really have to pay attention most of the time.” 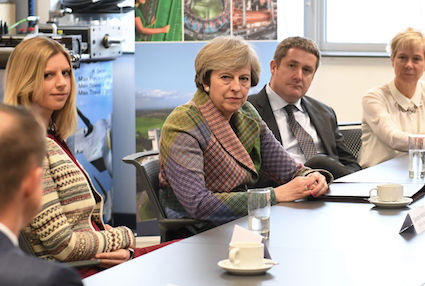 THERESA May is to spend the next fortnight telling as many people as possible to just shut it.

The prime minister has postponed the triggering of Article 50 to the end of the month in order to meet voters whose views are ‘pointless and annoying’.

“People are still questioning my approach to Brexit, even though I’ve said repeatedly that it’s fine. They clearly need to be told to shut the fuck up, one-to-one and face-to-face.

“Manchester? Shut your greasy pieholes. Glasgow? Pipe down and crawl back in your bottle. Cardiff? Nobody’s listening, you complete tools.”

She added: “Button your lip, back Brexit and unite behind me with the silence of a well-ordered classroom whose faith in their teacher is absolute.

“Not one fucking word.”