THE Liberal Democrat conference has recreated the sleazy atmosphere of an old-fashioned adult movie cinema.

MP Norman Steele said: After a quick glance left and right to make sure nobody I knew was watching, I dodged off the street and through the doors of the Lib Dem conference.

A half-empty room populated by tired-looking pasty men with poor home lives, staring blankly at the entertainment while occasionally rummaging in their coats for a sandwich or biscuit.

You can tell some delegates are homeless and have come in just for a sleep in the dry.

Danny Alexander complained about the overpowering smell of wet clothes in the main auditorium, but I told him that sometimes in life you have to take what you can get. 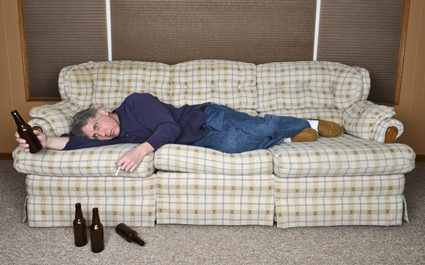 RAGING alcoholic Tom Logan celebrates Oktoberfest every day in his flat, he has claimed.

49-year-old Logan enjoys beers from around the world in the celebratory atmosphere of his bedsit, with traditional entertainment from the television.

Logan said: You dont need to be in a big Bavarian tent with crowds, buxom barmaids and lederhosen to enjoy the worlds biggest festival of binge drinking. The best party is the one in your mind.

My Oktoberfest happens at home, with just me there, and for twelve months a year instead of one.

I used to vary the beer selection although now its focused on strong budget lager which has a great fizzy taste.

Sometimes I cry uncontrollably for a bit but generally it is great.

Logan admitted that this years Oktoberfest budget was particularly tight after he was sacked from his job and his wife divorced him.

It hasnt affected the vibe though. Im still up all night, drinking and eating the sausages which are my only source of nutrients, until the neighbours bang on the ceiling.

Even then I quite often tell them to fuck off. They’re just jealous.”