Johnson, 43, launched a tirade against "the Cockney" for their excessive chirpiness and their insistence on "rolling out the barrel" at the slightest excuse.

The Tory MP said: "Sitting around the old Joanna down the Mile End Road every evening whingeing about 'boiled beef and carrots' is a pathetic thing to do in a modern capital city.

"Why can't they pay for their own beef and carrot concoction instead of expecting the taxpayer to be constantly riding to their rescue?"

Johnson's campaign slogans will include, "London – Absolutely Ghastly" and "Londoners – What a Bunch of  Shits".

He will also write to the International Olympic Committee urging them to change their decision and award the 2012 games to Tehran.

Mr Johnson added: "Upon reflection I am completely wrong.

"I will now buy a megaphone and a hot air balloon so that I can apologise personally to the whole of London, the world's greatest city that smells of eels. Oh shit." 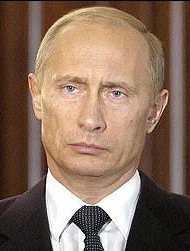 PRESIDENT Vladimir Putin has threatened to withdraw an entire squadron of lapdancers from central London, as the diplomatic row with Moscow escalates.

Putin said: "Weak British men must pay for naughties. Cannot live without naughties. I take away fruity girls, your country weeps like child with knee injury.

"You say I am bad man. You say I make enemies go 'poof'. I say you cannot live without naked botties in face."

He added: "You make enemy of my Russian tough boys, I buy all your football teams and turn them into pig farms. I am Vladimir. You will obey."

An embassy spokesman said the findings were 'entirely coincidental' after the expulsion of four Russian diplomats, adding: "In Russia everyone carry polonium, in Britain everyone carry crisps. What is problem?

"When chubby British tourists leave Moscow, chocolate level drops by 70%. You are fat but we do not hate you."

Meanwhile Harrods, Fortnum and Mason and a string of Bentley dealership across the South East are bracing themselves for bankruptcy if any more Russians are asked to leave the country.