May pulls trigger on Article 50 and nothing happens

THE prime minister has pulled the trigger on Article 50 but is still unsure whether anything has happened or not.

Theresa May pulled the trigger in Downing Street this morning, accompanied by her Brexit team, but they were unable to ascertain if she had done it correctly or if it is not working.

She said: “I expected there would be some sort of light. Or a sound. Perhaps a ‘ding-dong’ or a ‘ping’.

“They told me to trigger it again, and I did, then a few more times, and then of course David Davis had to have a go because he didn’t think a woman could do it right.

“It’s this yellow plastic thing on a wire like an old Scalextric controller, except I wonder if the trigger’s broken because it doesn’t even click. Look. Nothing.

“What if it goes off and on every time you pull it? Can we call someone at the EU and ask if anything’s happened at their end?”

May added: “Is this the sweet air of freedom, or is it still the oppressive atmosphere of Europe? I can’t tell.” 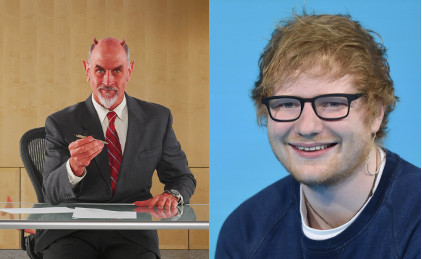 THE Devil has admitted he was wrong to allow Ed Sheeran to exchange his soul for fame.

The pact enabled the youngster to become a pop star and have sex with a series of beautiful women, despite looking like he would be more comfortable working in a Morrison’s bakery.

But now that Sheeran has used his powers to dominate popular culture across the globe, the Devil has been forced to apologise.

He said: “I’m so sorry, I really messed up there. Like every other creature in every realm, I’ve heard Shape of You every fucking day for what seems like millennia. It haunts my dreams.

“I’m no music aficionado – in the underworld it’s mainly the screams of the damned and a lot of Europop – but even I can tell that it’s hateful rubbish.”

The deal stipulates that the singer-songwriter will eventually be dragged to Hell, although the Devil confirmed he is looking for a loophole to avoid this.