THE government has warned Russia to be more careful when trying to kill people.

After toxins were found in the vicinity of the attack on Sergei Skripal, Theresa May told Russian spooks to tidy up after themselves when murdering enemies on British soil.

The prime minister said: “If Russia continues to use dangerous nerve agents there will be serious consequences, such as a health and safety investigation by the local council.

“If they really must use deadly poisons that could harm the public we’d ask them to ring 999 beforehand so we can have a chemical warfare unit ready to detoxify the area.

“We have issued voluntary guidelines for foreign assassins which have been published on the gov.uk website, I strongly suggest Putin reads them or he could incur a £50 fine.”

All squirrels on coke 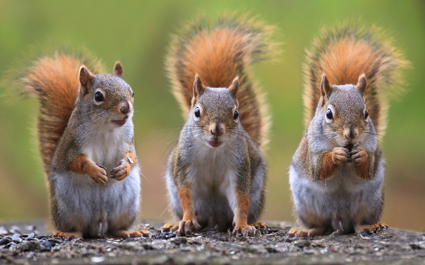 SQUIRRELS are all on cocaine, it has emerged.

The tree-dwelling mammals confirmed that their jerky, agitated movements and obsessive nut-gathering are the result of hefty drug habits.

Squirrel Wayne Hayes said: “A normal squirrel day is like – run up really fast up tree, do a massive line, run really fast back down tree, repeat.

“We didn’t even evolve to live up trees. Squirrels were supposed to live in tunnels like rabbits. But one day a squirrel got so off his tits that he said ‘fuck it, I’m running up that tree, right to the top, then I’m going to jump between the branches going mental’.”

Squirrels first picked up a gak habit when they stumbled on a discarded wrap in Hyde Park. Soon they were all doing several grammes per day and now many spend are openly dealing around park bins.

Hayes added: “I’m buzzing so hard right now. I’ve got to chase another squirrel around a bush for no reason.

“Am I talking too fast? I’m wasted. My tail’s gone numb.”