MEMBERS of Parliament are still dicks, it emerged last night. Despite the ferocious public anger over the parliamentary expenses system and a pledge by MPs to reform it, new research suggests that many of them remain very punchable indeed.

Alan Duncan, the Tory shadow leader of the House, who has been at the forefront of his party's apologies for the expenses scandal, yesterday confirmed that he did not mean any of it and that he wants more money to buy nice things without being shouted at.

Speaking to the man who vandalised his garden, Mr Duncan warned that unless MPs were treated like Little Lord Fauntleroy, the House of Commons would soon not be able to attract money grubbing ex-oil traders like him.

He said: "I am now forced to bring in a packed lunch. It's basically a small Tupperware box with a Visa card in it.

"I then have to use this card to buy food at some French restaurant – French! – and then I have to carry a very heavy receipt all the way back to my office.

"Sometimes I have to wait days before that receipt is reimbursed, during which time I come dangerously close to dipping into the huge amounts of money I made selling oil to Pakistan during the Gulf War.

"Now you may say that bringing a packed lunch is no great hardship, but what you have to realise is that politics needs people like me, otherwise how will vast oil companies have their interests represented in parliament?"

Mr Duncan added: "I am being treated like a shit. Like an oily, greasy, grasping, selfish little shit." 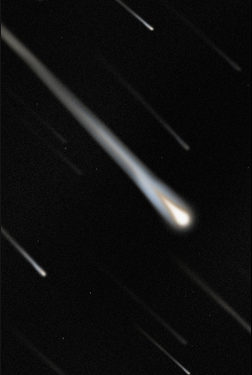 PEOPLE across northern England fled in panic last night claiming the 'cloud gods were shooting darts of angry fire across the sky'. 'Thor and Jesus are clealy not happy'

Emergency services from Carlisle to Middlesbrough were stretched to breaking point as thousands of soot-smeared villagers used their 'sorcerer's talking boxes' to phone the fire brigade.

But the exhausted crews were unable to keep up with demand as they dashed across the region, directing their hoses upwards in a bid to stop the clouds from bursting into flames.

A Home Office spokesman said: "Their natural reaction is to phone 999 as most Northerners believe the sky to be no more than 30ft high.

"You would think that the firemen would tell them not to worry, but of course northern firemen are still Northerners."

Meanwhile, south of Peterborough, the phenomenon was attributed to the Perseid meteor shower.

Cambridge astronomer Tom Logan said: "It is an annual astronomical event caused by debris from the Swift-Tuttle comet disintegrating in the upper reaches of the Earth's atmosphere. But of course to a Northerner, I may as well have said all that in Mandarin Chinese."

He added: "They're really just children. Unfortunately they're also huge, drunk children who will fling an old woman onto a bonfire if they think her cat is up to no good."

Stephen Malley, the deputy leader of Northallerton District Council, said: "The gods have tested us tonight, but I am glad to say our brave firemen were up to the task and the sky remains intact.

"However, it is clear that we have angered our invisible cloud masters and they must now be appeased with an extended period of sacrificial blood letting. I suggest we start with the poofters."