THE government has suggested that the border between Ireland and Northern Ireland could be one of those beaded curtains popular in the 1970s.

Ministers believe the curtain, which would run for the full 310 miles from Lough Foyle to Carlingford Lough, would fulfill EU requirements while allowing goods to simply be driven through.

A spokesman said: “You remember them? They were made of like cane or bamboo or something. Everyone had them.

“You’d put it in the doorway between the kitchen and the dining room, and they’d stop cooking smells getting through but you could still talk, or something. Actually I’m not sure why we had them.

“But if we use one, it’ll mean everyone knows exactly where the border is while not presenting any kind of barrier that would upset the IRA because you just part it with your hands.

“And if anyone tried to take terrorists or drugs or imports from China that don’t meet EU standards through, we’d know immediately because we’d hear the beads rattle.”

Sick son of a bitch makes tea in microwave 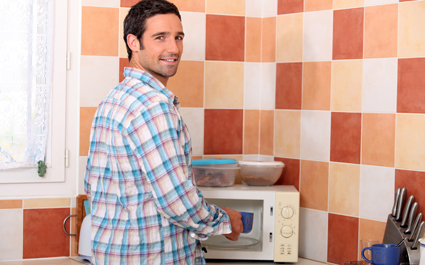 A WARPED individual habitually makes cups of tea in a microwave, it has been confirmed.

Family, friends and colleagues of Wayne Hayes reacted with shock to news that he makes tea by putting a tea bag and cold water in a mug and cooking it in the microwave for a minute.

His mother, Margaret, said: “All I can say is that this isn’t the way he was raised. I’d like to ask for privacy as we come to terms with this as a family.”

Hayes’s best friend Jack, who has known him since university, admitted that he had ignored early warning signs.

He said: “I’ve saw him do it a couple of times, years ago, but I always assumed it was youthful experimentation or that the kettle was broken or something.

“I had no idea it was something he made a habit of. I feel like I’m partly to blame.”

Hayes said: “They’re really going to lose their shit when they find out that I drink cold baked beans straight from the can.”