HER Majesty Queen Elizabeth II delivered her speech to Parliament while rolling her eyes and sighing theatrically.

The monarch, whose annual speech sets the governments agenda for the coming year, began in a facetious sing­-song laying particular bored emphasis on the repeated phrase ‘my Government’.

Conservative MPs claim promises to introduce legislation were gabbled through so quickly they were unintelligible, and when motioned by the Speaker of the House the Queen slowed her speech to a robotic monotone.

Heaviest sarcasm was reserved for the passages about new measures to help families, where in response to black looks from the chancellor the Queen affected an artificially bright and cheerful tone while grimacing.

Foreign secretary William Hague said: She clearly didnt mean a word of what she was saying, even before she muttered and that was the headline of tomorrow’s Daily Mail, at the end.

But it hasnt changed my absolute, unstinting support for the Royal Family, God preserve and keep them.

Shadow chancellor Ed Balls said: I did like the bit where she pretended the stuff about competition legislation had bored her to sleep, letting her head fall sideways until her crown nearly fell off.

“That was funny, although far from ideal.”

Following the speech, Queen Elizabeth was returned to Buckingham Palace by carriage, waving and flicking the traditional just-out­-of­-sight V­-signs at her adoring public. 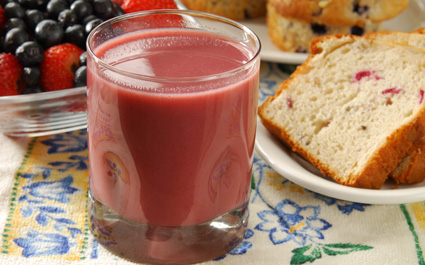 THE amount of drivel on smoothie bottles could affect consumers’ mental health, it has been claimed.

Research by the Institute for Studies found that smoothie packaging contains an average 50bsgrams – the unit of measurement used to assess bullshit – exceeding government guidelines.

Professor Henry Brubaker said: “Smoothie makers plaster their products with glib crud about ‘love and hugs’, ‘meanie-free deliciousness’, ‘more refreshing than a box of monkeys’, that sort of crap.

“Usually it’s written in an nauseatingly pseudo-casual tone designed to evoke a sense of ‘matey-ness’.

“When bullshit exceeds a certain level, it has a very specific effect on the human brain, causing feelings of severe agitation and annoyance.”

Professor Brubaker said: “A 38-year-old man called Roy Hobbs drove a stolen bus into the London offices of Organojoy Smoothies, whose slogan was ‘Full of win’.

“He then killed himself by repeatedly headbutting a wall until his frontal lobe caved in. His wife said he’d read the phrase ‘yum alert’ on a smoothie bottle and just wanted it out of his brain.

“Smoothie makers need to stop riding around their offices on scooters and start taking responsibility for the amount of psychic damage they’re doing.

“They must realise that consumers don’t want a relationship with them. They just want to metabolise the drink and go about their day.

“This also applies to people who make pies that come in little boxes.”