MARCH 8th: Schools resume throughout England. Drinking during the day halts. Productivity expected to rise, as is punching the air shouting ‘YES!’

MARCH 29th: Outdoor gatherings of up to six people or two households allowed in public parks, private gardens and the Cairngorms. Social and emotional distancing must continue; the only permitted reaction to a family member’s protracted story of lockdown woe is ‘Hm.’

MAY 6th: Voting in local elections and mayoral elections allowed. Voters are reminded that the new ‘Killer Keir’ variant of Covid-19 is shown to adversely affect anyone with Labour sympathies and to vote accordingly. Also if you do not vote Tory you won’t get your second dose of vaccine.

MAY 17th: Pubs to reopen, but drink is to be served in beer gardens only. Each pint must include a Scotch egg floater and smoking is only permitted indoors. The first drink of any session must, by law, be dedicated to Boris. Drinking during the day resumes, especially in Wetherspoons.

JUNE 26th: Glastonbury will be replaced by a spontaneous celebration of Brexit on every street in Britain, with grateful citizens waving Union Jacks and cheering for six hours continuously. To be shown live on the BBC, with Northern Ireland available on the red button.

AUGUST 2nd: Last year’s much-criticised Eat Out to Help Out scheme is replaced by the Eat Out or Lose Your Citizenship scheme, spearheaded by Priti Patel. Each household in Britain is required to dine at a chain restaurant once per week, by law. Single people must dine twice per week and have a starter.

SEPTEMBER 3rd: Schools close after opening for a single day because of the fourth wave, spread by pubs, cheering for Brexit and the Eat Out scheme. Nobody could have predicted this and nobody is to blame. 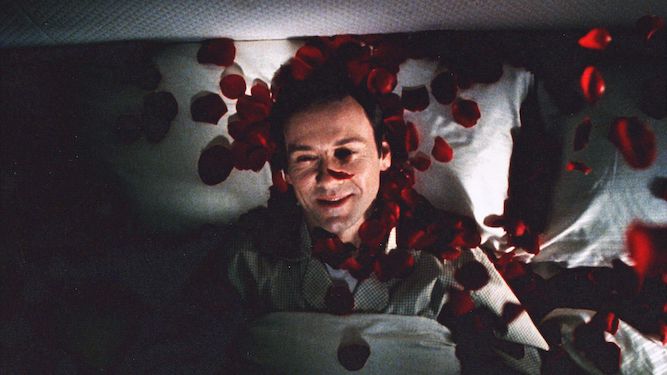 DID your favourite film star Kevin Spacey, and are you now swiftly changing that to something that requires fewer excuses? Don’t pick any of these:

A beautiful elegy to American suburbia or a film about a creepy middle-aged man starring an even creepier middle-aged man? On everyone’s top ten of the 90s, it’s now a movie even dedicated contrarians say is ‘very much of its time’. Wouldn’t be acceptable even if Spacey was digitally replaced by Christopher Plummer.

Another film you can’t admit liking without immediately appending that of course you don’t endorse the lead actor. Most people would rather strip naked, paint themselves blue and run through Glasgow city centre on a Friday night than try and earnestly defend Mel ‘Sugar Tits’ Gibson.

The key revelation that a soldier’s girlfriend has a dick is, in current times, a veritable pit of problematic. Gay or trans? Positive and affirming or a parade of outdated attitudes? Do you really want to have these conversations when you could be cancelled for them?

Kubrick: genius or cock? Very probably both, but apparently filming this permanently traumatised Shelley Duvall, making watching her being driven into helpless hysteria more uncomfortable than it already was on purpose, and making you a bastard for enjoying it. Unless you just like the carpets.

Gone With the Wind

The fact it’s the highest-grossing film in history aside, it’s difficult not to feel uneasy about a film that romanticises the Confederacy and makes slavery look like a cheerful romp for black characters. But aren’t Vivien Leigh’s dresses pretty?

The entire oeuvre of Woody Allen

Long gone are the days when saying your favourite romcom is Annie Hall made you look intelligent, refined and sophisticated. Now you’d look like an unrepentant creep. And whatever you do, don’t mention Manhattan.