That wanker Gove's next in line, Britain realises

WORRIED Britons have realised that current attacks on Boris Johnson could be a prelude to even worse wanker Michael Gove replacing him.

The media’s sudden lack of support for Johnson, and Gove’s smirking contortions in half-hearted defence of the prime minister, has reminded the country that a very depressing power struggle is going on.

Tom Logan said: “That Johnson bodies remark? Usually they’d laugh it off, and print some bollocks about Prince Louis wearing long trousers instead.

“But now they’re treating it as if it’s a stupid, callous, sociopathic thing to say, and asking questions about corruption too. Either they’ve opened a dusty desk drawer and discovered a moral compass or there’s a Gove coup gearing up.

“I’d be glad to see the back of Johnson. He’s shit. But I don’t think I could bear that smug little stop-motion goblin Gove as PM. I’d have to smash my telly or do myself in.”

Donna Sheridan said: “Johnson’s a pompous, arrogant twat, but he plays it for laughs. Gove’s pompous, arrogant but plays it like the evil, scheming grand vizier in a pantomime. It’s like deciding whether you want irritable bowel syndrome or frequent migraines.

“Shit, I’ve just realised Sarah Vine will be constantly wanking on about being the prime minister’s wife. On reflection, all the bodies-piled-high stuff is fine by me.”

The next five scandals Boris Johnson will walk away from unharmed 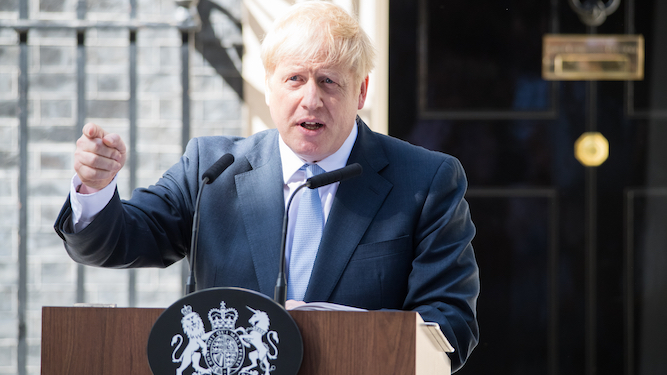 DIPPING into Tory coffers to redecorate his flat is just the latest scandal that won’t trouble Johnson. He’ll also walk away untouched from these five:

The break-up of the United Kingdom

The cracks have been growing for years, and thanks to Johnson’s conviction that only England counts there’s a good chance he’ll be leader when it finally breaks apart. Instead of disgracing him, Johnson’s buffoonish handling of the situation will be celebrated and the Scots and Irish will become the new hated foreigners.

Improbable, but there’s a slim chance that a man ran a campaign of lies to win Brexit for personal gain might not follow through on his promises. But fishermen will laugh off their raw deal though because Johnson will appear on the telly waving a kipper saying ‘what a spiffing haul’.

It’s impossible to predict which class, colour or creed Johnson will offend next, but given his track record it’s only a matter of time. But the outrage will swiftly be weaponised as a ‘war on woke’, Boris will be declared the new Prince Philip, and it’ll make him so popular even Sir Keir Starmer will vote for him.

Pushing the Queen down some stairs

After receiving a knighthood he awarded himself, Johnson will shake the Queen’s hand and push her down a gold staircase. Her Majesty will tumble for a full thirty seconds before dusting herself off and playfully punching him on the arm. The incident will be celebrated on worthless commemorative coins your mum buys from the Mail.

In need of a quick boost after tanking the economy, Johnson decides to move Trident to Cardiff Bay and escalates it into a full-blown nuclear standoff between Wales and England, which the English find hilarious. Sends our wartime nostalgia into overdrive and sees Britain declared a one-party state before he jokingly nukes Snowdonia.