I MAY look like a Bond villain but since my big revenge on Boris was a few leaked texts, I’m clearly one from the Timothy Dalton films. Here’s what’s next:

Oh yes, I’ve kept the receipts Boris. And my records clearly show that, even when dining with colleagues much more intelligent than you, you claimed it was fair to ‘split the bill’ even though you’d had two bottles of Chablis, a starter, a pudding and the cheese board. This will ruin you.

Didn’t see the little red light on my phone, did you? Didn’t realise it was recording the conversation where you called Michael Gove a wannabe sex gimp without the courage to rubber up, then made him come in and dance for us like a broken little puppet. Britain will be outraged at your disrespect.

I deleted your memoir

Remember that big Boris memoir you were drafting? Your life’s work? Well, first I hacked into your computer and changed every mention of Boris to ‘wanker’ but then I decided to go even further and I deleted the whole thing! Overwrote it completely! Now you’ll never write it, and will just get a ghostwriter to do all the hard work instead then not pay them.

Exposed as a love rat

The country believes you only began shagging Princess Nut Nut when you were estranged from your wife, but we know the truth don’t we Boris? Oh yes. You were unfaithful for two months in violation of all the church’s teachings and I have the texts to prove it. There’s no way the Conservative party will let you survive this.

I’ve been keeping my little insurance policies right from the start because I’m a genius like Zuckerberg, Oppenheimer or Lex Luthor. And I’ve got you recorded saying that Brexit is nonsense, the British people will never vote for it, and you only joined Leave to raise your profile and piss off Swotty Dave. Actually you know full well Brexit is bad for Britain. Boom. Minds blown.

You would never have had the freewheeling, unfettered imagination to think of this, or the high IQ, but I crapped in the Downing Street cistern. Yes that’s right. For the last six months every time you’ve flushed it’s been contaminated with faecal matter from I, Dom, the true victor in the 2019 election. Ha. Who’s the winner now?

Six shit things to have in your garden 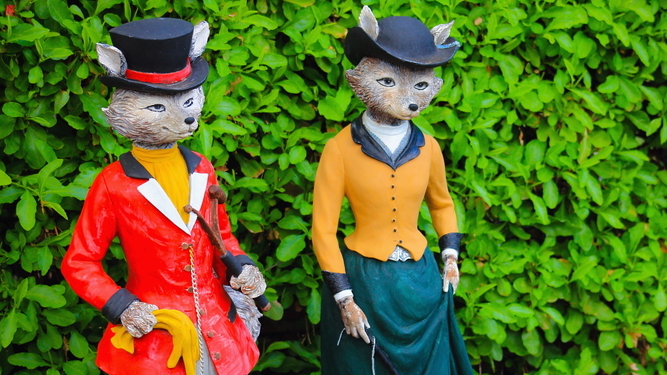 Gnomes. Animals made from stone. Animals wearing clothes. Twee ‘Our garden’ ceramic signs. And don’t forget dozens of solar lights in the shape of dragonflies, birds and medieval torches that constantly change colour. What could be more relaxing than a garden that looks like a scene out of Blade Runner?

A once-fun item that now has the same ‘sink estate’ stigma as leaving a broken fridge in your front garden. Even neighbours who aren’t terrible snobs won’t be overjoyed to have bouncing children looking into their garden all the time while constantly screaming.

You are not Bear Grylls, cooking at one with the natural world – it’s just a kitchen hob on wheels. You’re meant to cook over wood or charcoal, not set up a mini mobile catering unit on the patio. If you can’t even deal with a few firelighters, it’s time to ask if you are a real man.

Don’t worry about your carbon footprint, get some cheap lumps of non-biodegradable tat made in a slave labour factory in China. When they break under someone’s normal weight, dispose of them in an equally responsible way, in a local field or lake.

The last word in shit taste and knee-skinning impracticality and all because you’re too bone idle to mow the lawn. Spend a fortune having it installed, before wondering how you thought this lurid monstrosity could ever be passed off as grass. It’s too late now, so avoid the issue by shutting the curtains and never going back into the garden.

Get a grip – you live in the UK, not a beachside mansion in the Caribbean. Invite all your friends round to christen it with a prosecco party then realise it’s still f**king freezing out there, even in June. And your neighbours will forever believe you are sleazy swingers.