The five stages of accepting Boris Johnson will be prime minister

THE UK is slowly coming to terms with the fact that Boris Johnson will be our next prime minister – but how far along are you in the process?

Are you still hoping that Boris’s girlfriend will emerge from the secure location she’s being held in with tapes of him calling Brexit ‘a load of bullsh*t for thick kn*bheads’? Do you actually believe Tory members care when he’s caught lying? You are still in stage one.

Have you found yourself lashing out at friends, family or your son’s primary school teacher on flimsy pretexts? Do tiny things, for example the use of two spaces after a full stop, make you explode with rage? Were you found punching a haystack and calling it an ‘entitled posh tw*t’? You are in stage two.

If you’re saying things like ‘Actually it’s good it’ll be Boris because it’ll get it out of the Tories’ system and anyway he’ll have to call an election and he’ll lose so he won’t even be prime minister and a hung parliament will call a second referendum’ then you are stuck in stage three.

Unable to get out of bed, because soon Boris Johnson will be leading the country? Can’t open the curtains because what’s the point with that tw*t in Downing Street? Eating peanut butter from the jar because why not, we’re all doomed? You’ve reached stage four.

Are you calm about the prospect of Johnson gifting Trump Scotland to win his favour in a trade deal? Saying things like ‘Perhaps it’ll be great to be a tiny tax haven?’ Preparing for our new prime minister by converting all your liquid assets to Bitcoin? Congratulations. You’re at stage five. 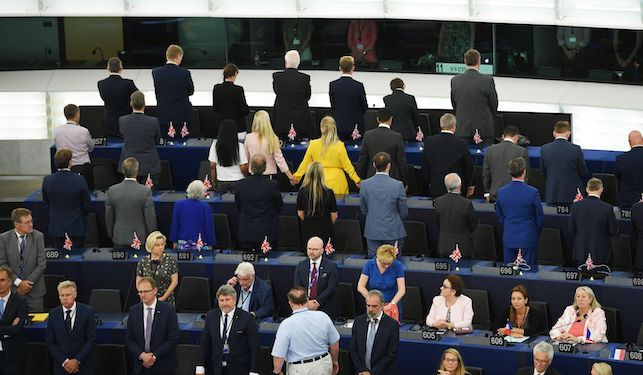 KEEN to be a rude sh*t and humiliate yourself at work, like the Brexit Party’s MEPs did by turning their backs on the EU anthem? Read on!

Whine endlessly about not wanting to be there

No-one wants to go to work. But acting like the job you ran for and got is a shock and embarrassment to you, while of course collecting your pay and daily expenses, means that everyone will slowly shake their heads in disgusted disbelief whenever they see you.

Make a stand about something pathetically petty

Embarrass yourself by making a big self-righteous fuss about something utterly stupid, like wanting your tea in a Union Jack mug or being given an iPad. You’ll look like a d*ck but like all d*cks you’re too much of a d*ck to realise it.

Not getting your way? Show how you feel through a childish display of frustration, such as holding your breath until your face turns blue or crapping in your pants. Portugal will definitely respect you then.

Be obnoxious to your colleagues

You think acting like a posturing teenager makes you look cool and rebellious, when in fact it makes you look f*cking idiotic. Your colleagues hate you but refuse to give you the satisfaction of telling you to your face.

Go home at night and cry

Everyone else is meeting for moule frites and glasses of Leffe in a bar, but you weren’t invited. Instead you go back to your rented flat in the city you profess to hate after a day looking a loser in a job you’re not qualified for and cry yourself to sleep. Only five more years.