BORIS Johnson’s opportune new baby and wedding have already covered up Priti Patel’s incompetence, but what else will they distract from?

The first scan picture of the prime minister’s child should mask the news that everyone in Whitehall has been fired and replaced with teenage internet edgelords who say ‘Really you should retire at 40, get five years state opiates then be euthanised’.

The MP for Surrey Heath is unmasked as a former Bosnian warlord wanted by The Hague on the very same day, coincidentally, that Symonds goes into labour. All reporters and the vital BBC helicopter are diverted to hospital coverage. Gove just brazens it out.

News is just coming in that the pound has lost 75 per cent of its value in a day when a proud Johnson and his girlfriend emerge onto the steps with his sixth or seventh child. The newspapers love it and the pound recovers by 5.8 per cent anyway.

The birth of Boris’s other baby

The birth of a half-sister to the Johnson-Symonds baby, to a junior Commons researcher formerly atttached to the Foreign Office, takes place just a fortnight later but goes unnoticed by the media as the prime minister announces his son will be called Donald, after Trump.

The wedding of Johnson and Symonds in November will obscure announcements that the UK is to have an Equatorial Guinea-style trade deal with the EU, in that it won’t have one. Cheering crowds won’t care about food and petrol rationing as they watch the radiant bride and her dishevelled groom.

Adorable Christmas pictures of the impish No 10 newborn are used to announce a curfew enforced by the military, mandatory ID cards and random checks at roadblocks.

The baby’s first birthday will neatly hide that the UK is rejoining the EU after just six months out, because all the people with money are deserting Britain and the Tories have realised what they’ve done.

After the fourth pint we charge you double, admit bar staff 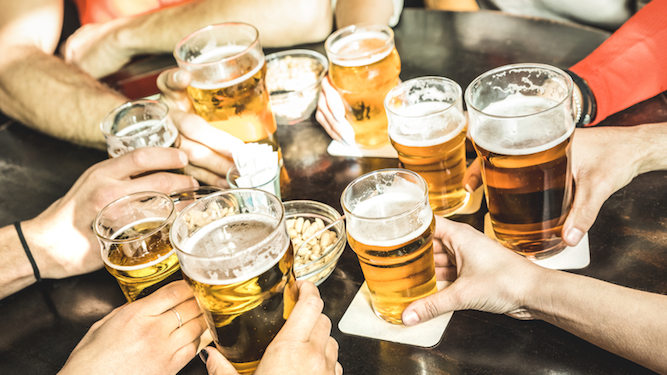 ONCE you are half-cut we ramp up the price without you noticing, bartenders have confirmed.

Drunkards are so out of it after the fourth pint they will hand over double the asking price of a round of drinks with no questions asked.

Barmaid Nikki Hollis said: “If you’ve ever wondered where your money disappears to after a night out, now you know.

“By the time they’re staggering over for the fifth pint most people have long forgotten the going rate for a pint of Carlsberg, which is grossly overpriced to begin with.

“The hardest part is controlling ourselves as it would be easy to chuck an extra 50 quid onto a round. Of course, the rules change if they’re still buying drinks after the 10th pint. We call that ‘open season’.”